Over Memorial Day weekend Peter and I had two objectives in our crosshairs; North and Middle Sister.  Due to our schedules and the long approach, we would have to summit both in one day. For the first time I had to do all the research for a trip.  Up until Friday night, Peter was away on a six day course while I researched the routes, studied pictures and printed us maps.

I was also struggling to finish a literature review for school, but I seemed to keep finding myself deep in trip reports with another hour down the drain.  By the time Saturday morning rolled around, Peter was on his way to Eugene and I was still about 800 words away from the minimum requirement.

Once Peter arrived, we packed (in the usual disorganized and inefficient way we've come to expect) and headed toward Sisters.  We were at the trailhead by six, just in time for the skies to open up and pour down rain on us.  Expecting only light precipitation, I had not packed legitimate rain gear to save on space.  We realized that at least my clothes would most likely be soaked all weekend if we started walking right then.  After waiting it out in the car for 20 minutes the rain turned to a drizzle and we began packing.  I cut some holes in a garbage back and fashioned a makeshift rain poncho (not the first time I've had to do this . . .) to try and keep a little bit dry. 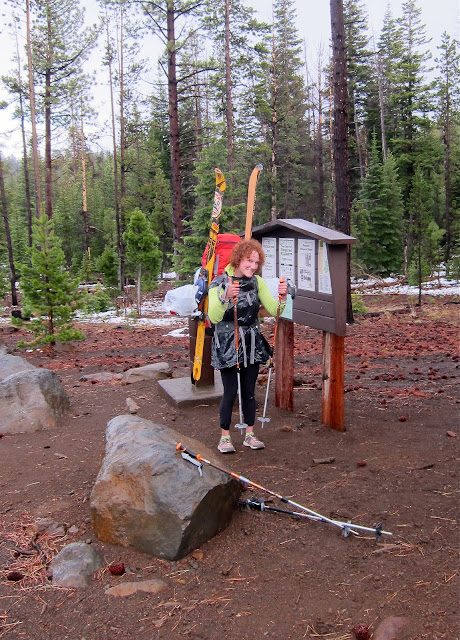 We made quick time on the snowless trail but had to switch to skis a few miles in.  Skin tracks diverged and criss-crossed like a checkerboard through the forest and navigating became difficult.  Unsure of where we were as the sun set, we set up camp just off the track; we were nearly two hours from our intended camping area.

As the sun rose the next morning we set off in what we were mostly sure was the right direction.  We quickly found Soap Creek- the landmark we were missing the night before- and after crossing it were on a steady uphill track toward North Sister.  Low on her southeast ridge we set up our tent and ditched the overnight gear; then we were on our way. 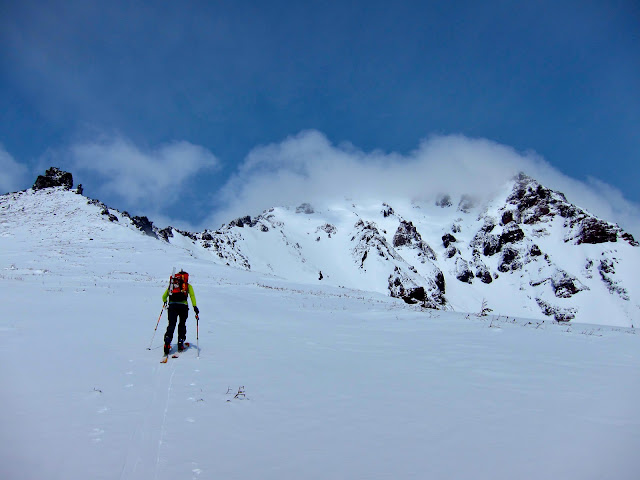 Skinning up the SE ridge

Soon the ridge became rocky and hard to navigate on skis.  We booted past one stalwart gendarme after another, finally realizing that we wouldn't be able to ski the ridge.  At that point we made the decision to bail on Middle Sister.  North is much more appealing, so we made that the main target and ditched our skis behind some rocks. 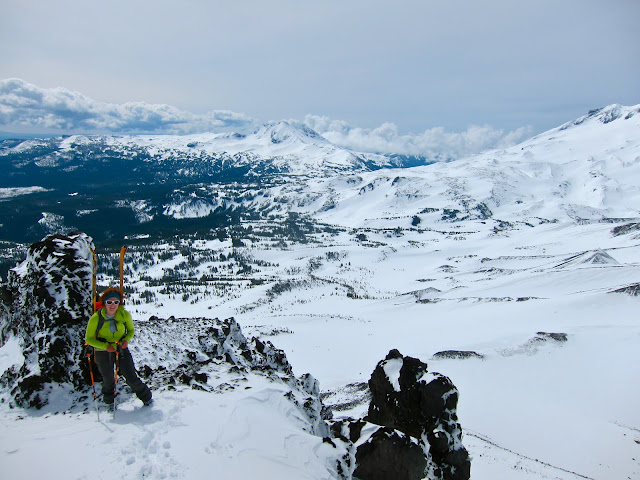 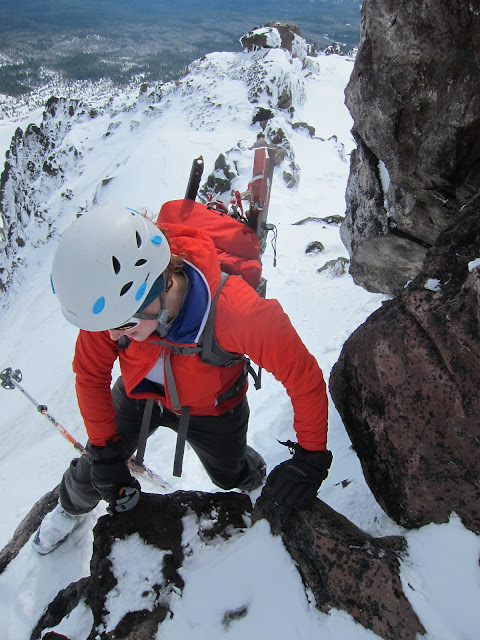 Thanks to a week of wet spring snow we were often trudging through (literally) balls deep drifts.  In some spots we chose the steeper and more exposed north side of the ridge which was sufficiently icy.  This would be my first time climbing steep snow. 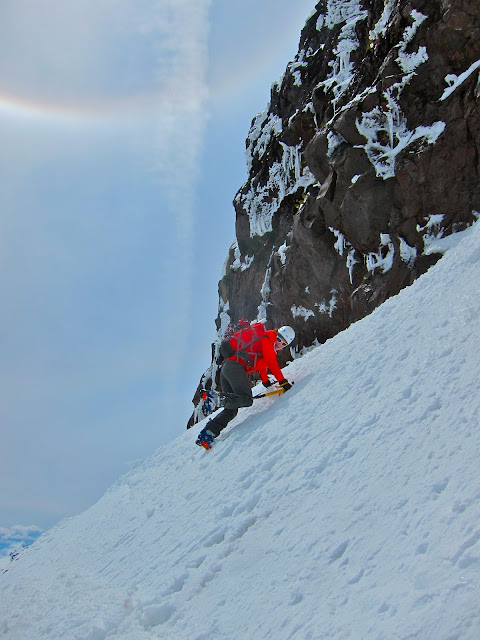 The climbing was slow.  Every few steps I had to knock the snow out of my crampons and every few minutes we found ourselves back to wallowing. 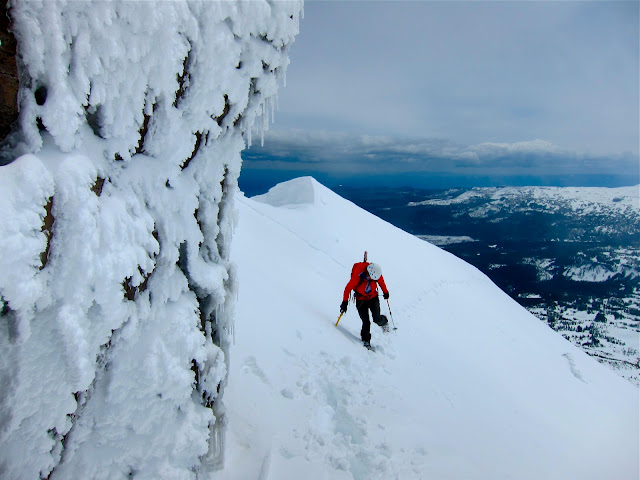 Step after deliberate step the distance between us and the craggy summit pinacle grew smaller.  Unfortunately, we knew that to summit we had to traverse behind the pinacle and climb it from a different direction.  Unfortunately, with every step we lost more visibility to the swirling clouds that rocketed up from the wet west side and just barely swept their tentacles around the peak. We pushed on thinking we might break out of the clouds. 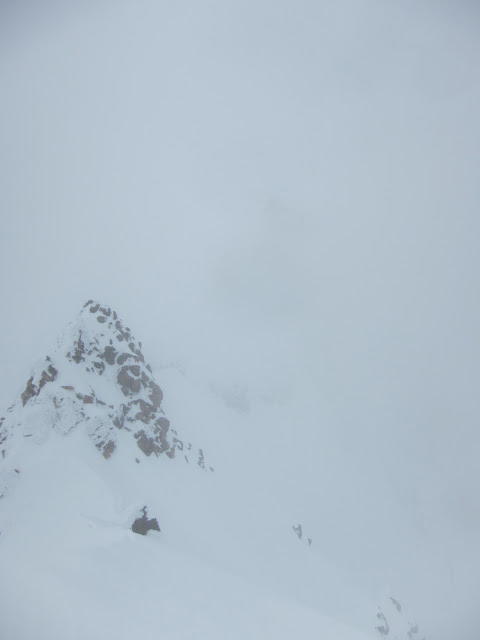 We came to one rock pinacle that was too sketchy to just walk around and we couldn't even see past it. Peter slung an anchor around a large boulder and I put him on belay.  He traversed below the rock above the steep slope that was once the Thayer Glacier.  Once out of site I heard a faint "off belay" and the rope pulled taught.  I followed delicately in Peter's footsteps.  In places the snow sluffed underneath me and I choked on my heart for a moment.  The exposure was daunting, but I maintained a steady tempo of breaths and steps until I found myself at the other anchor. 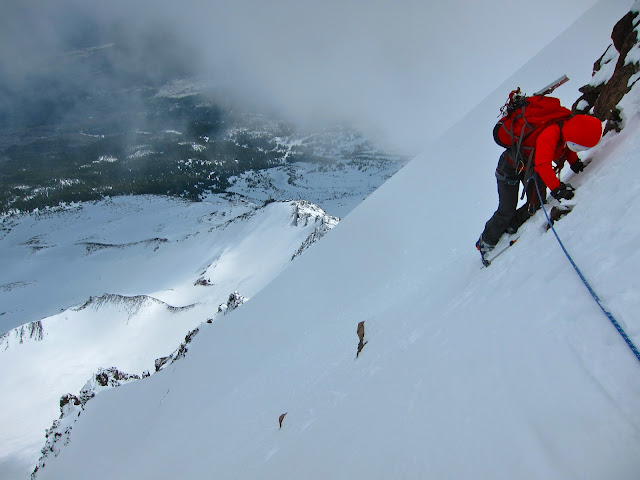 From the other side of the pinacle we couldn't see even to the summit.  We were at the highest point on the route that one could get without climbing on icy rock.  Without being totally sure of the route from there, we decided to turn around.  On the way back down we took a few variations out of the deep snow that allowed for some dry tooling, which was also a first for me. 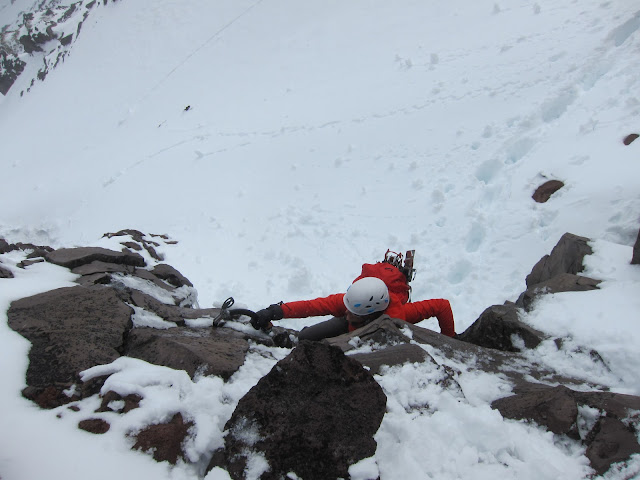 Once we reached our skis it was a quick trip back down to the tent.  Where we had set up camp the sun was shining and the temperature was pleasant.  Grateful for the rain shadow, we had a relaxing evening, a lazy sunny morning and a skin out that required some good old fashioned orienteering. 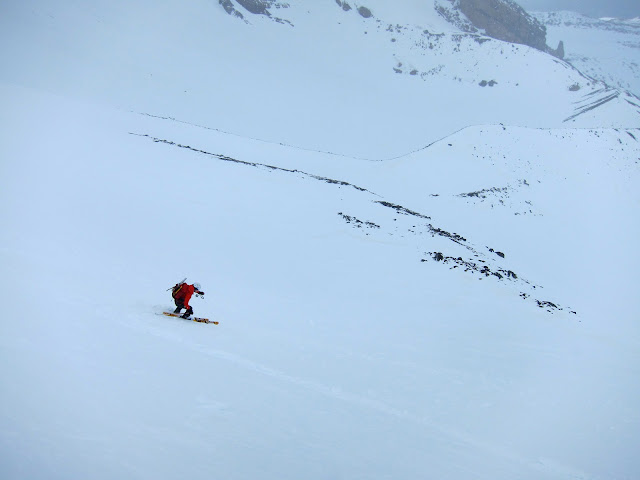 Posted by Katie Paulson at 9:50 PM No comments: