I sat in the middle seat, nodding off on the way to Corvallis.  I was deposited at Jacks house with my skis in hand.  Another week had ended, and another weekend had begun; open for me to do with it whatever I pleased.  We spend the morning packing the car, shopping for a group dinner and waiting for the rest of the carpool to arrive.  By the early afternoon, we were headed to Mt. Hood and the cabin in ZigZag where we had spent the weekend one year ago.

Once we arrived, there was a mad dash for the hot tub.  Soon, we were packed in thigh to thigh, beers in hand as the sound of the jets mingled with excited chatter and punctuated loud laughter.  This is one branch of the friends we made at the Bailey cabin over a year ago.  We only see them a few times a year, but they are always warm and friendly as ever.  I love every minute I get to spend with these people. 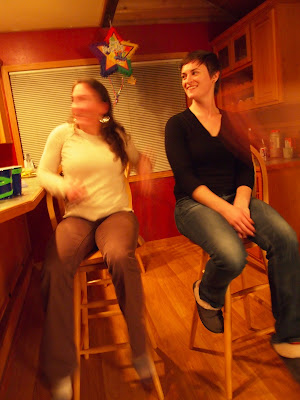 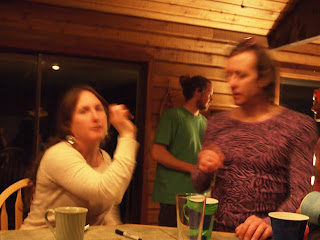 The party lasted until the wee hours of the morning.  I was waking up for a pre ski day dip in the hot tub as the last holdouts were going to bed.  By 9, Peter, Clay and I were headed for the mountain.  It hadn't snowed in a while, but there were a few inches in the forecast for the day and we eagerly awaited the arrival of dark snowy clouds. 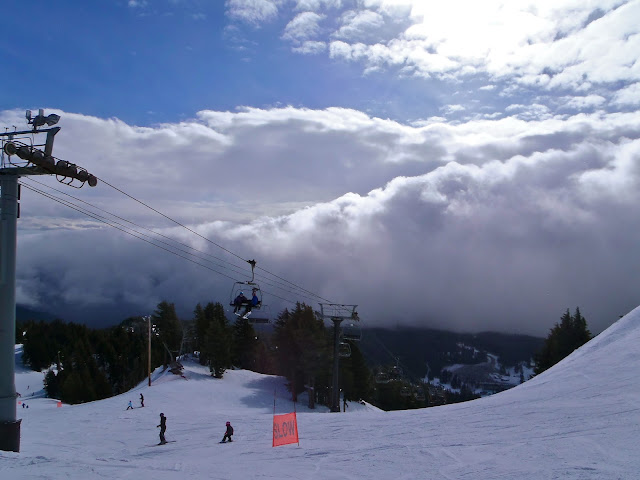 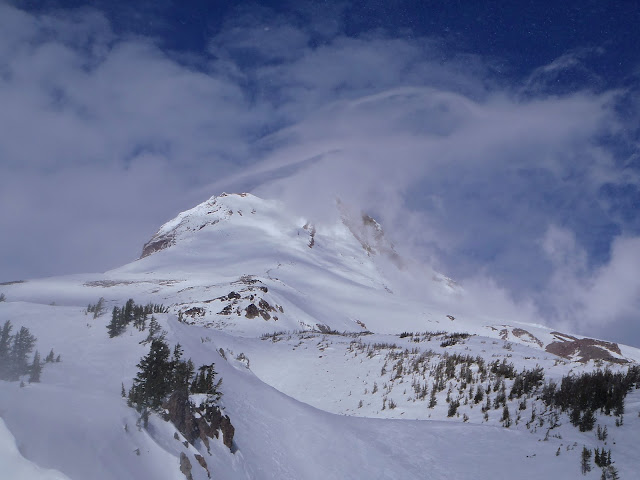 Eventually, the snow came.  Peter and I stayed a few hours into night skiing, lapping cruiser runs blanketed in new buttery snow.  When we returned to the cabin, we faced another night of dancing, merrymaking and the hot tub.  We had decided to do a short tour the next day, so Peter and I embraced the night and I found myself just leaving the tub around 5am.
After sleeping in, we discovered that the weather was perfect for climbing Hood.  We raced to Timberline and were skinning up under the Palmer lift by 11am.  It was warm and sunny below 9000 feet, but as we ascended the wind picked up and kept us cool.


Not far above the Palmer, the icy wind features- while very beautiful- made it too difficult to skin.  We hoisted our skis onto our backs and continued the long slog toward the crater.  Near the crater the air was filled with the overwhelming smell of sulfur as it belched from a hole in the snow.  We had a quick snack and traversed to the Hogsback, which was covered in shin deep powder.

Due to the last minute nature of the climb, neither Peter nor I had crampons.  There was a decent crust and soft snow, but the last few pitches of steep snow and ice were a little unnerving.  The sun was getting low in the sky as we topped out Old Chute and walked the last hundred yards to the summit.


We had to down climb the top twenty feet of rime covered Old Chute in order to start skiing.  The top was rather icy, but with a light layer of skiable soft snow on top.  After traversing one very steep, very icy section, we were at the Hogsback- the crater's amazing powder stash.

Once we hit the crater, it was the end of nice snow.  For the next 1500 feet we burned our quads on the bubble ice and searched for tiny patches of soft snow.  I stopped periodically to rest my legs take photos of the spectacular sunset views.  The light was almost gone as we cruised the last few hundred feet of the Palmer groom, making it back to the car in under 7 hours. 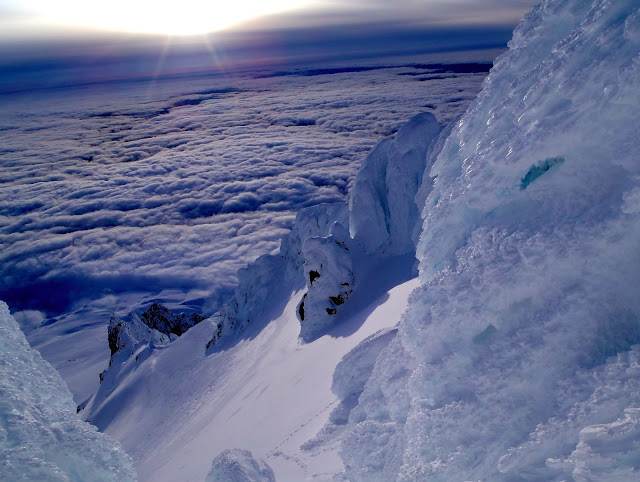 Until this year, I've thought of skiing as something to do until climbing season returns.  But as I completed my biggest skiing challenge to date (in good style, to boot!) I realized something:  I don't want winter to end.  Though a sunny weekend on the rock at Smith sounds oh so enticing, I want to suck every last turn out of this season.  I think that now, I can really call myself a skier.  Here's to another few months of snow!

Posted by Katie Paulson at 11:37 PM No comments:

Now that I'm back sitting at my desk, the last few days are a snowy haze.  I barely know what day it is, or what day it was when whichever thing may or may not have happened.  Blurring the lines of the "weekend," I ran away to Seattle for three days of skiing, drinking and merriment.  I left my stuffy office and stepped outside for a breath of fresh air.

When I return to Seattle as a visitor, it's different.  My days are packed with trying to see every person I miss.  Suddenly I have to prioritize people, and it's impossible to squeeze them all in.  This time was different though.  Nathan was in town from Montana, ready to ski as much as possible, so I wrote everything off and prepared to ski, ski, ski and let whatever else fill in the cracks.  It worked amazingly.

After a night at the College Inn (where the bartender still remembers my name) I whirled around Lina's apartment packing to ski.  Four of us met up in North Bend and headed toward Alpental for a tour toward Chair Peak.  It was a beautiful day filled with laughter and reminiscing.  Lina has been my hero since the day I met her.  She is constantly jumping from one place to another, so the fact that I stole her away for a day was pretty much the best.


Afterwards we stopped for some refreshment at the North Bend Bar and Grill.  I rode back to Seattle with Lina and talked about life and love and all the things you imagine girls talk about.

That night a group of us went to capitol hill.  The first part of the night was filled with cocktails and music.  The guitar was passed around as the rest of us tried to remember the words to the songs.  I treasure moments like these because this is no longer a part of my life.  I don't have these friends in Eugene, I don't have friends like them in Eugene.  I'm just happy that I haven't had to say goodbye to this forever.

We found ourselves at Ihop at 4:30 in the morning; I was eating bacon and eggs.  Two hours later I was finally asleep, and an hour after that, I was on my way to go skiing.  Nathan and I met up with Rip, who drove us to Stevens Pass where we found Bert and Max.  We lapped Yodelin a few times and found ourselves in an unexpected powder day.

Sunday brought us to Rainier for a full day of skiing and sledding.  Nathan and I woke early to tour in the morning and four of our friends met us in the afternoon for some contraband sledding.  It was another day of tank top weather in the backcountry. 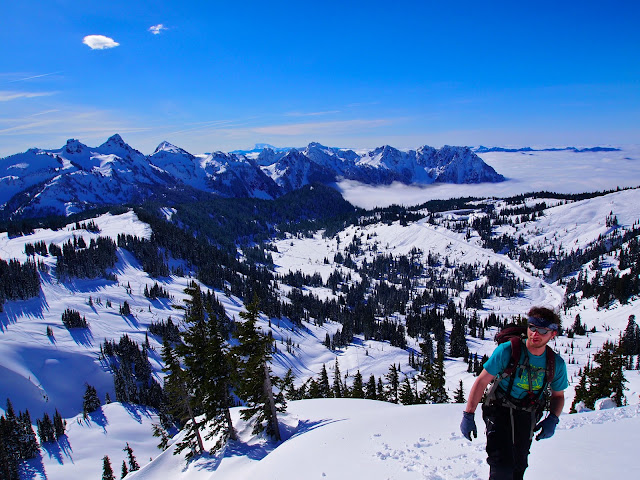 Not long after we had begun sledding and the sun sank in the sky, thin clouds crept up the valley where we were sledding.  We played almost until dark, when the trees hung in an eerie glowing mist that seemed to go on forever. 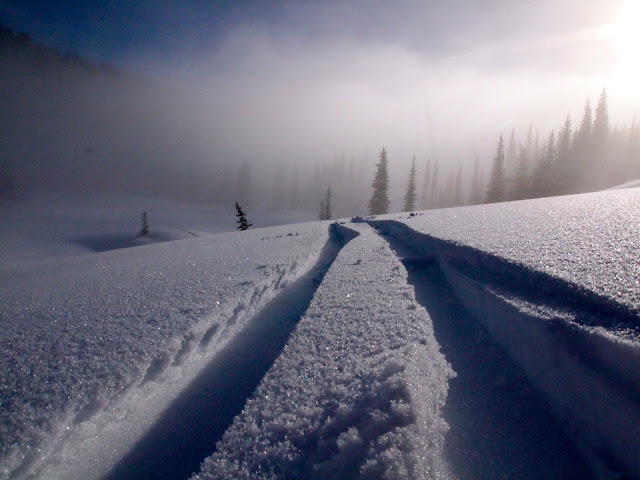 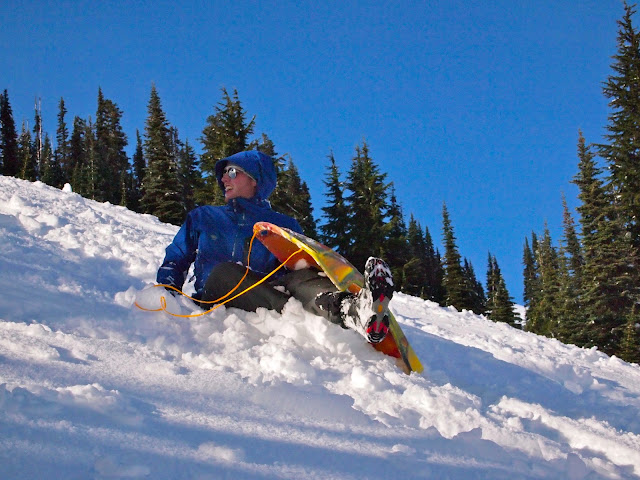 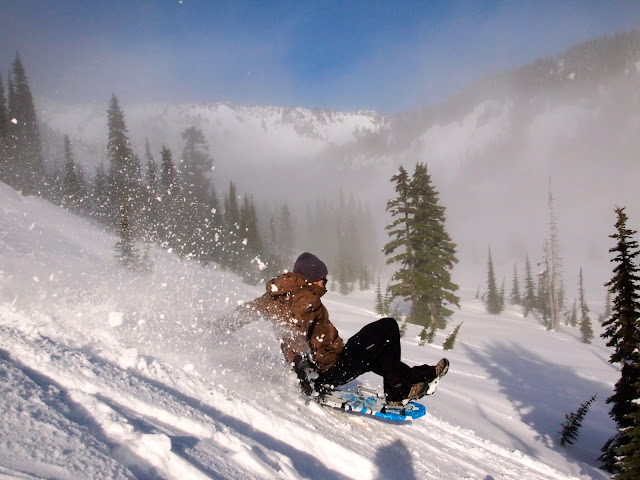 We had a mellow night at Lenny's before I was to catch the train in the morning.  It was like I had never left.  We sat at the same corner table, drinking Lenny's big beers and shooting the shit until the bar was closing.  In the morning I lugged my skis and my aching head to the train and stepped inside to go back to my real life.
Posted by Katie Paulson at 7:43 AM No comments:

A few weekends ago there was a nasty inversion.  Eugene had been thick with fog for over a week; we had not seen the tops of the trees, much less the sky.  Lauren and I drove to Terrebonne on Friday evening and met Peter at the Smith bivvy.  The cold was bearable overnight and once the sun shone on the rocks, it was tank top weather.  We spent a few hours climbing the routes on the Peanut before making the trek to Sunset Slab on the West side. 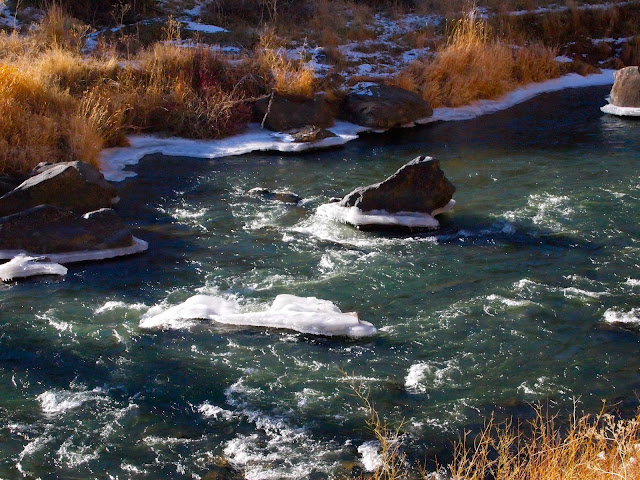 That night we stayed in Bend with my friend, Erin, who I know from Seattle.  We had dinner at Cascade Lakes Brewery and fell asleep watching Aspen Extreme.  The next day, the three of us toured Tumalo Mountain with plentiful sun and mediocre snow conditions.

We returned to Bend to find homemade pizza for dinner (Thanks, Erin!).  On Monday, Peter left early to return to work and Lauren and I stopped at Potato Hill on the way home.  It was frigid in the parking lot, but ten minutes into the skin, we were WAY too hot.  So for the rest of the day we skied the soft corn snow in our skivvies. 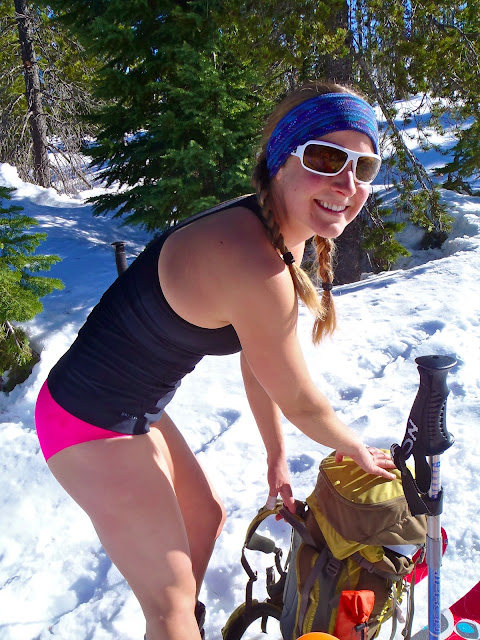 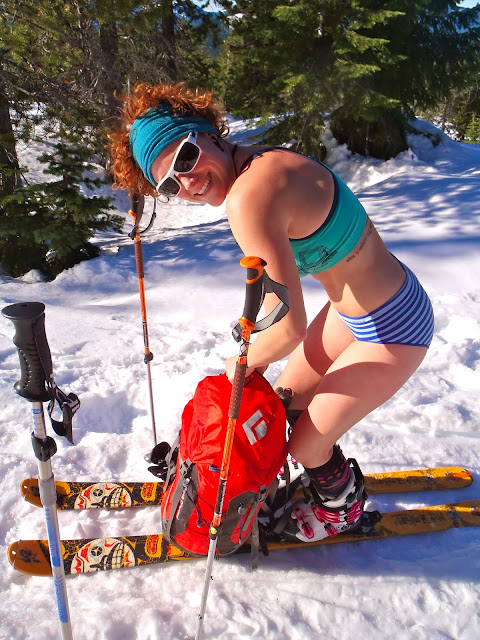 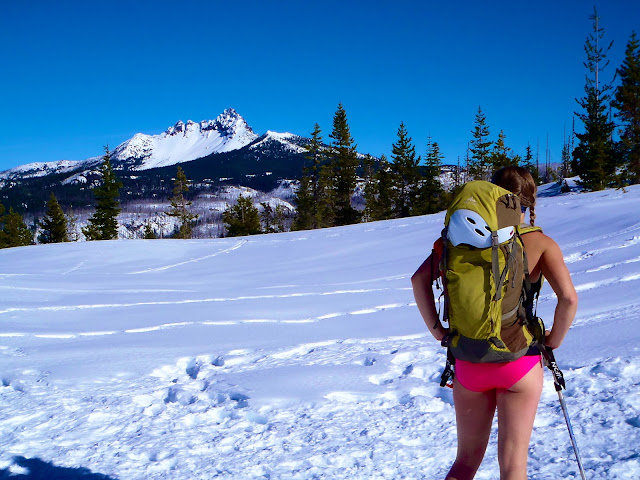 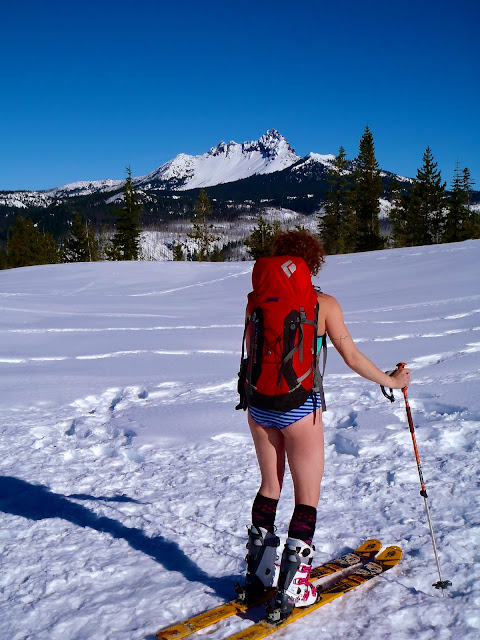 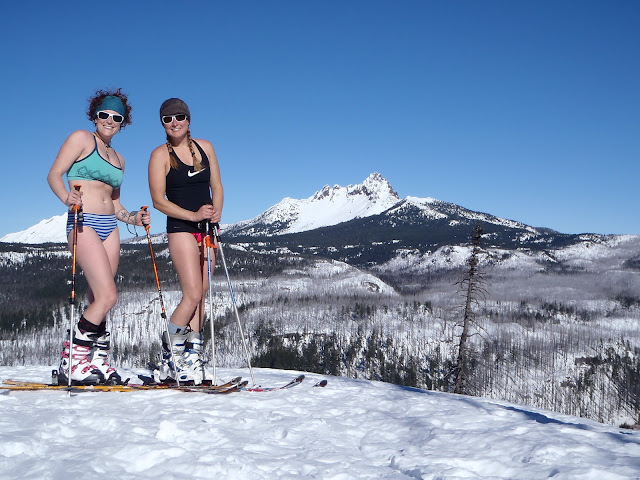 The following two weekends we ventured out to a new touring locale.  Red Top Mountain is just past Willamette Pass near Crescent Lake.  The skin in is long, through flat trash forest, but when you reach the top, the view is fantastic.  When Lauren and I went up, it was cloudy and snowing, but Peter and I got a bluebird day with forgiving breakable crust. 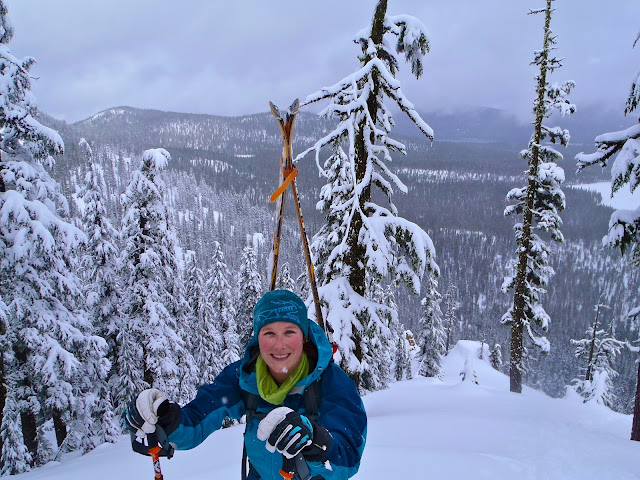 On the way home, we stopped in Oakridge at the local brew pub.  It's a cozy place where the bartender knows everyone who walks in.  The walls are adorned with empty beer bottles from breweries across the state.  There's a sitting room with couches, a music room with a piano and darts, pool and endless board games.  It is the perfect place to finish up a ski day. 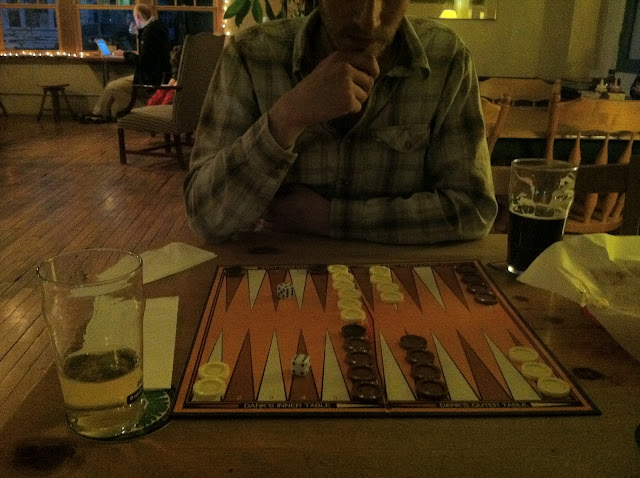 Posted by Katie Paulson at 9:40 PM No comments: