For the first couple days of spring break Peter and I spontaneously decided to do a multi-day tour at Crater Lake.  Immediately afterward we would be driving to Smith Rock State Park to climb for the latter half of the week, so packing was a considerable amount of mayhem. 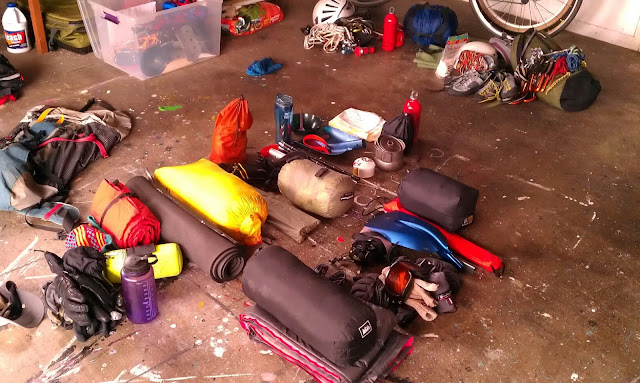 Saturday evening we found ourselves winding through the Umpqua valley toward our favorite (only because we haven't been to any others) hot spring.  We camped there that night and soaked in the springs, appeasing our bodies before freezing them for three straight days.

In the morning we set out for Crater Lake National Park.  We drove through snow, rain and then snow again as we made the final climb up towards the massive caldera.  After picking up our backcountry permit at the ranger station, we drove the last bit of winding road to the Crater Lake Rim parking. 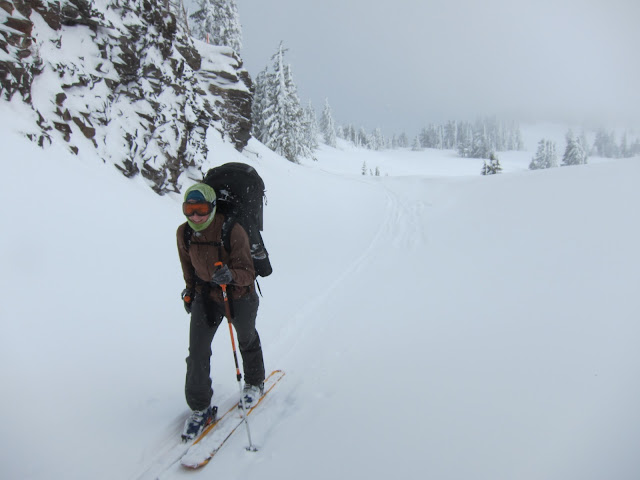 While hastily packing out of the truck in the driving snow, an older couple snowshoed by us, "Are you camping in this?" they asked with alarm. Our nods were met with, "Well, you're a hearty couple!"  Slightly smug about our heartyness, we finished packing and skinned northward towards The Watchman. 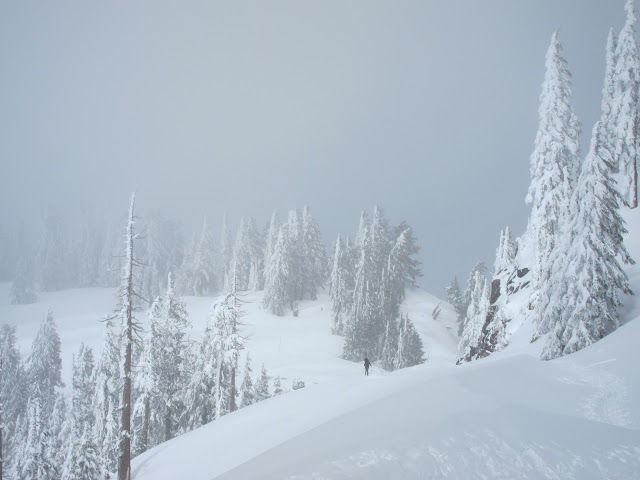 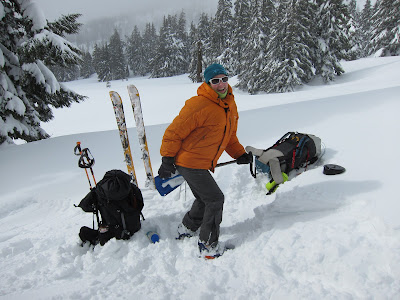 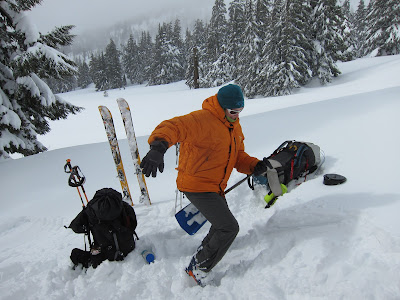 The evening was calm and began to clear up.  Rays of light coming from the setting sun snuck their way under the high, patchy clouds as we set up our tent in a sheltered nook.  Peter set to melting us more water as I read aloud the pamphlet from the USGS geologic map of Crater Lake that I had purchased at the ranger station. 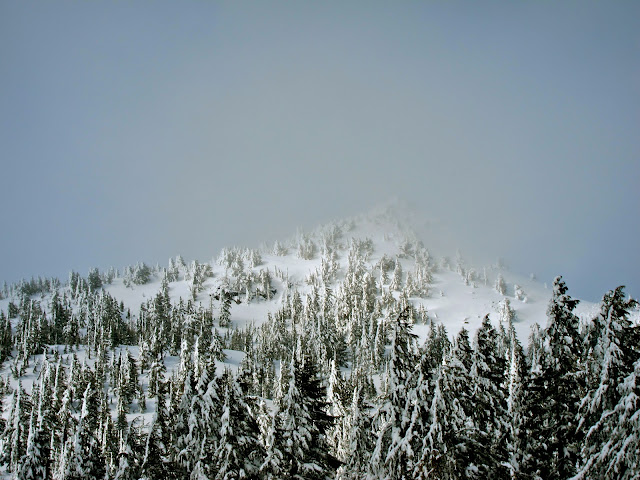 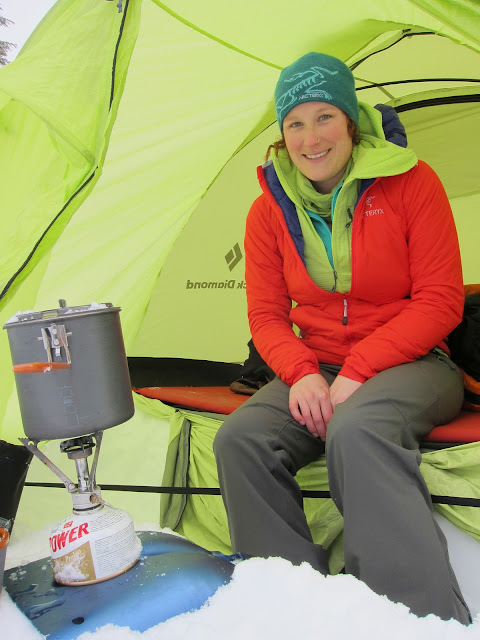 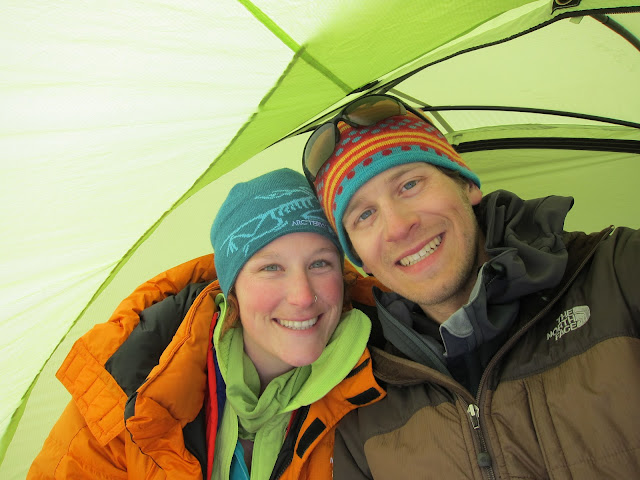 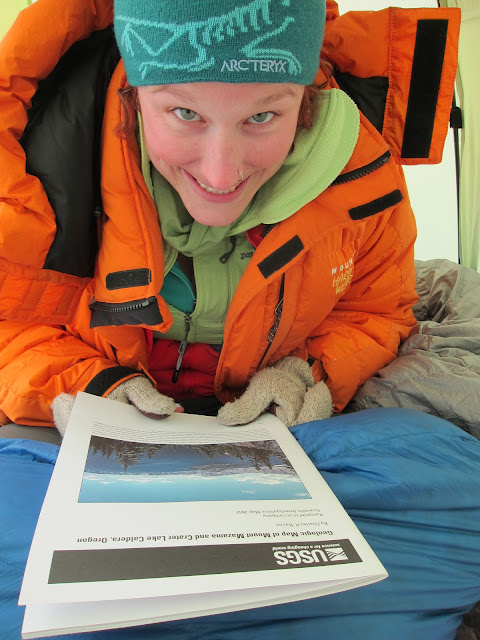 As the darkness closed in around us the number of Ramen package carcasses littering the tent grew.  We played a few card games and dozed off in a cold cocoon.  I could feel the chill coming in from the ground and sneaking into my body from the air.  Even though I was wrapped in layers of down, it was bone chilling.

In the morning we ate breakfast and took off in search of good skiing.  Continuing up the rim trail, we passed below The Watchman and were greeted with an amazing view of the lake and Wizard Island on the other side. 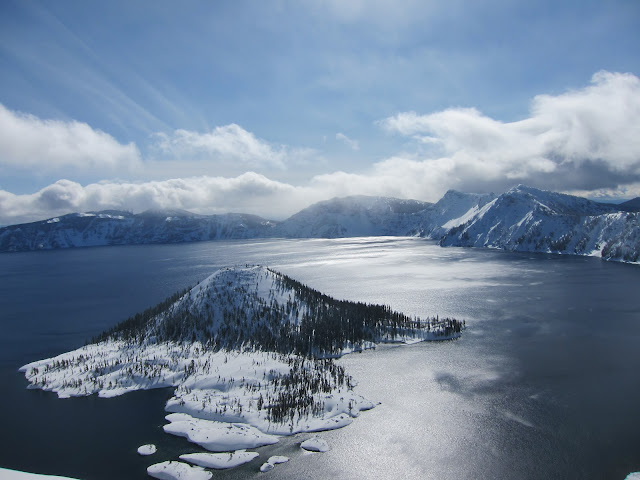 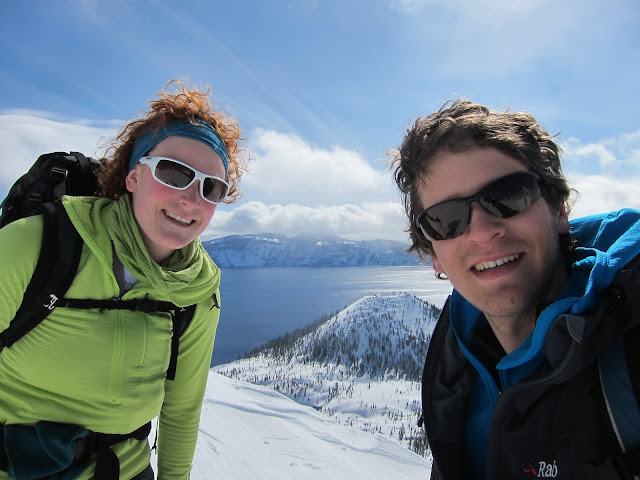 From here we could see The Watchman, Hillman and Llao peaks.  All over 8000ft along the rim of the lake, we decided to try and tag their three summits before the day was done.  So we headed off toward Hillman, the tallest of the three, and began climbing up an arm coming off of the mountain. 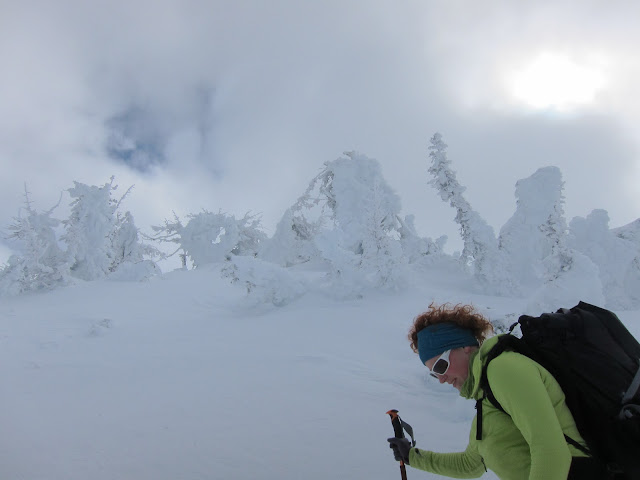 The slope steepened and the snow deepened so we ditched our skis and booted up the north side of the peak.  Peter stopped and dug a snow pit to make sure it would go.  After a good amount of wallowing, we made it to the first of our three objectives! 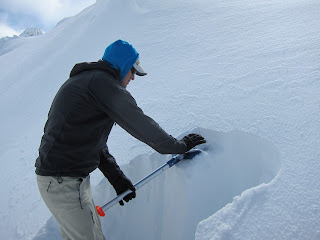 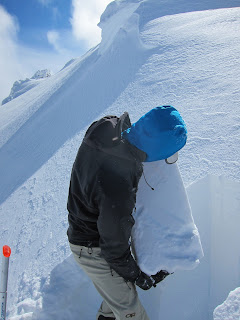 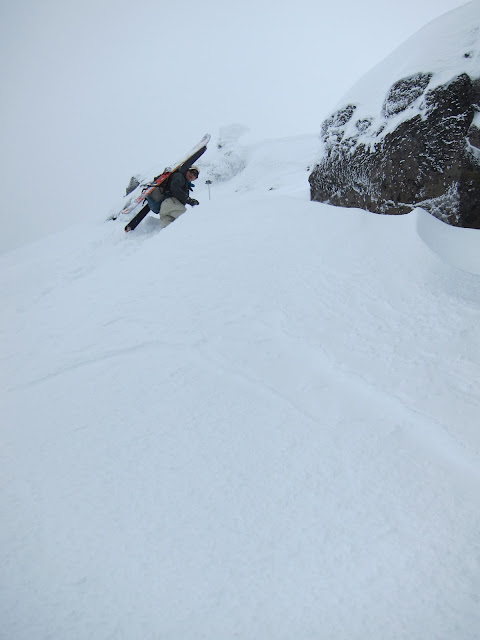 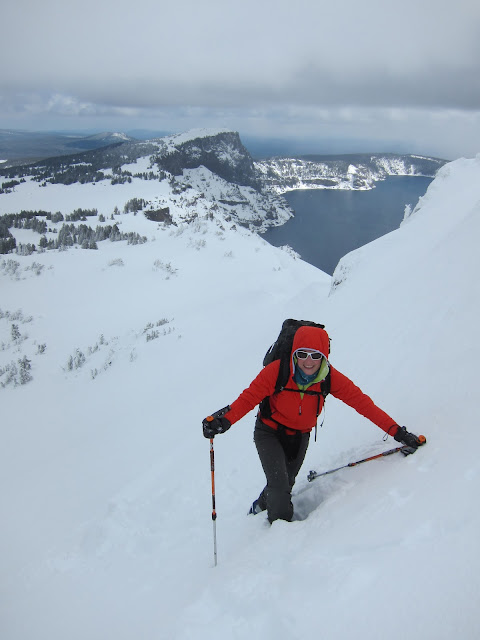 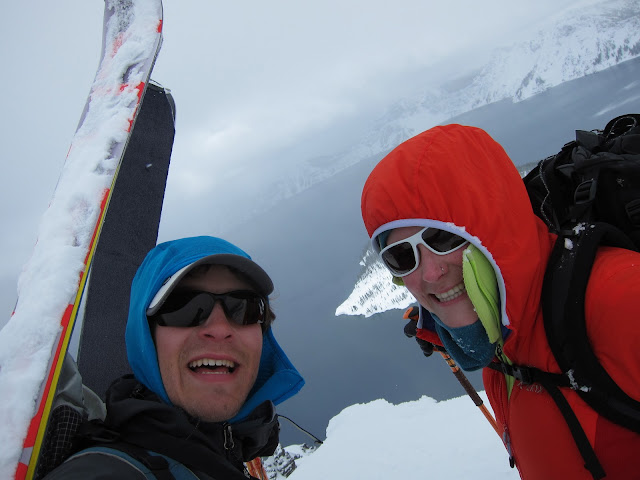 After getting a few turns off Hillman we poled and skated our way to the base of Llao.  A quick lunch saw us skinning up the massive rhyolite dome ten minutes later.  We reached the summit at the same time as some inclement weather.  With the winds howling around us, we creeped up to the edge of the shear cliff, snapped a picture and made a run (ski?) for it. 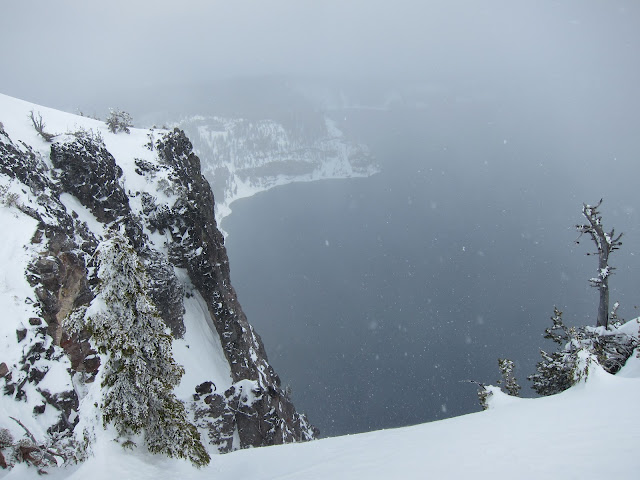 It was a long slog to the base of The Watchman.  The weather came in and out; I stopped to change my clothing arrangement more times than I can count.  We reached the treed ridge to the summit and after a few more minutes of narrow switchbacks, the rime covered shack at the top came into view.  By this time we were losing visibility quickly, Peter brewed up some hot drinks and after a granola bar we skied back down to camp. 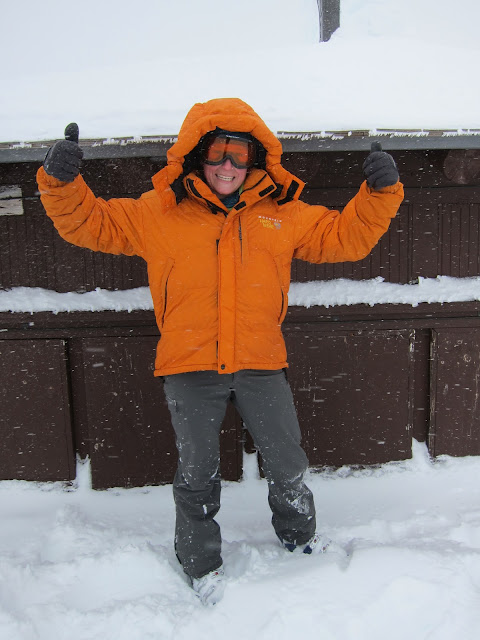 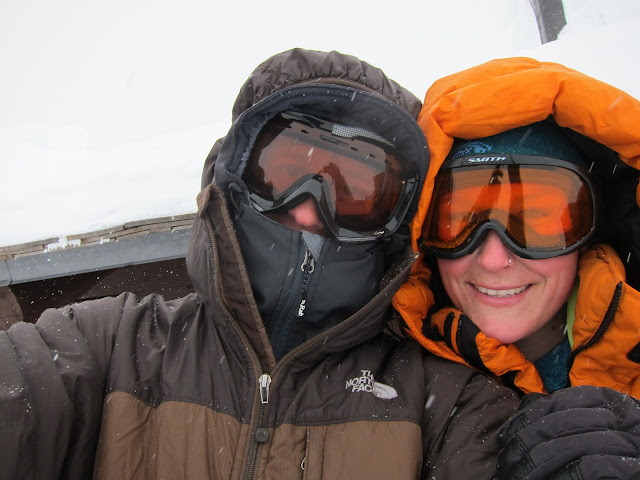 It snowed hard all night.  We made dinner and hot water bottles and I slept like a toasty rock.  In the morning we broke down camp in the driving snow and trudged through the new powder back to the car.  In areas the wind blasted ice into our faces and the blisters on my feet screamed. When we reached the parking lot there was a foot of snow around the car and no one in sight.  The ranger had warned us that if it snowed the road would be closed.  We would have to call for a plow to help us down from the rim area.

Peter's Pathfinder was able to make it out of the uniform snow in the parking lot, but the windy road was spotted with alternating patches of bare road . . . and 4-5 foot high snow drifts.  We blasted through one, but the next drift on the road was easily chest high when I got out of the truck.  We were stuck.  Armed with our avalanche shovels, we started digging.  I was able to call down to dispatch and request a plow, but it would be 30 more minutes before it got to us.  We dug and pushed and dug and pushed but the car stayed stuck.  Eventually the plow made it up the road and the men inside hopped out with shovels to help. 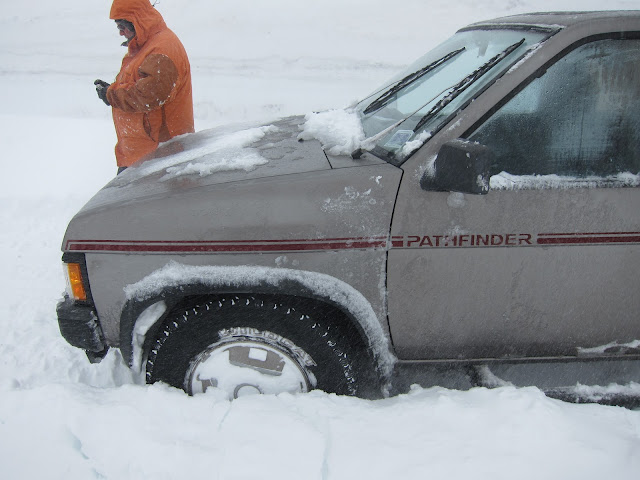 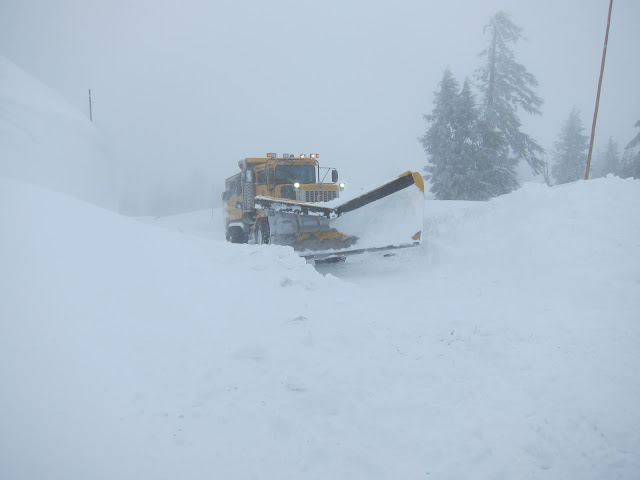 Soon we were unstuck and on our way to the desert for some sun and rock. 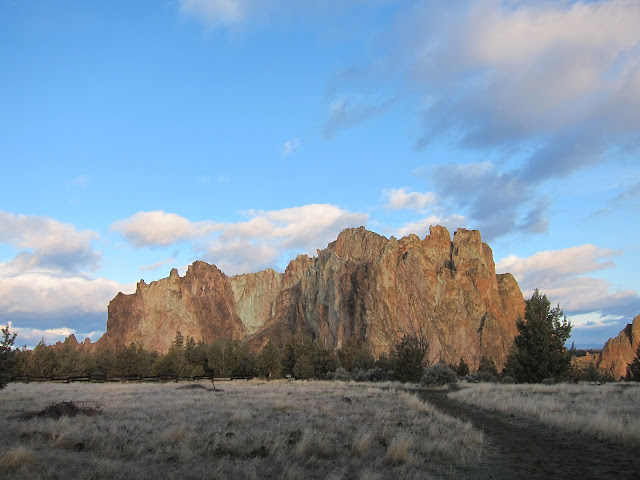 Posted by Katie Paulson at 1:34 PM