When the rain comes

When the rain returns to western Oregon we have two options: duck and cover or make a run for clear skies.  At Smith it was clear, sunny and bitterly cold overnight.  We sat around with hot drinks all morning; willing the feeling back into our toes.  Once we walked out to the rock, it was warm enough to strip off the layers.  Perfect. 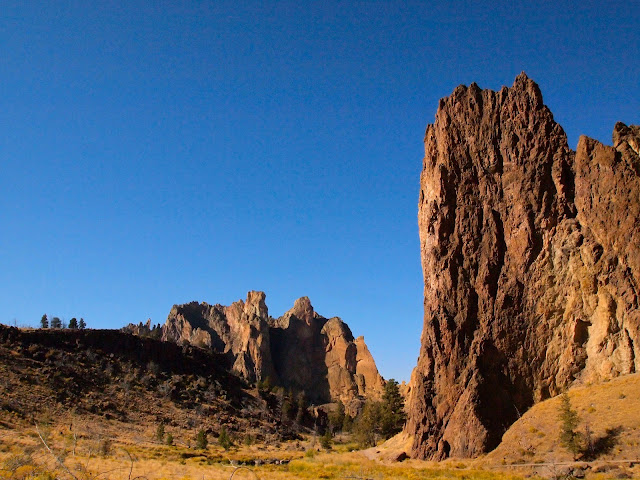 That weekend, we got to climb in some areas we've never been before.  The Monument area is closed for eagle nesting most of the warm months, but in the fall it opens up again.  We warmed up there and then moved to a small crag called Adit Rock after lunch.  At Adit we found fun moderate sport and trad climbs that we shared with a group of Mazamas.  The next day, we visited the Christian Brothers area on our way to the four star rated "Screaming Yellow Zonkers" (5.10b). 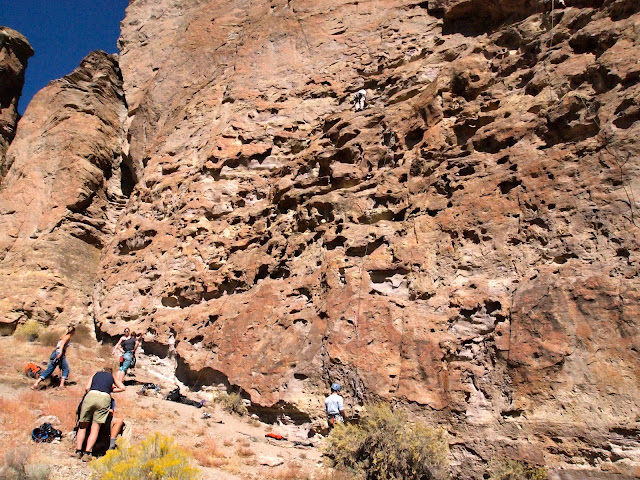 The Monument Base Area 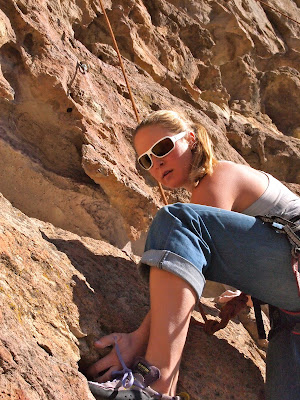 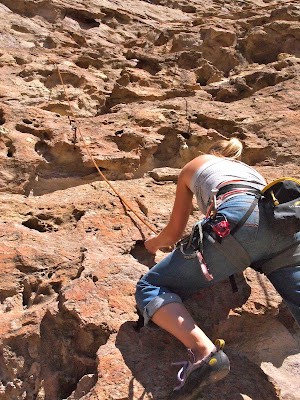 Lauren on a climb at the Monument Base Area 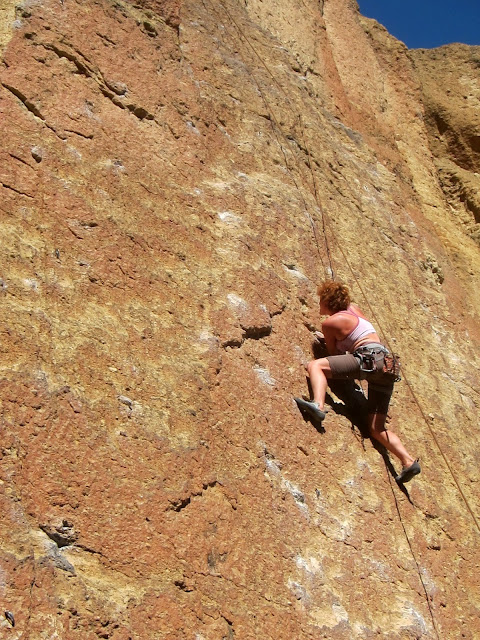 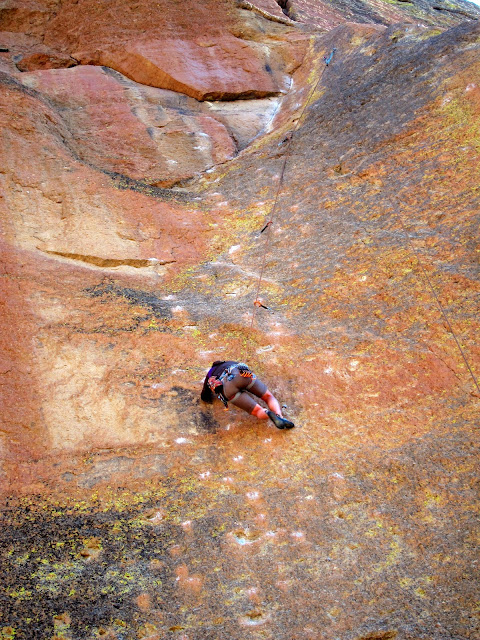 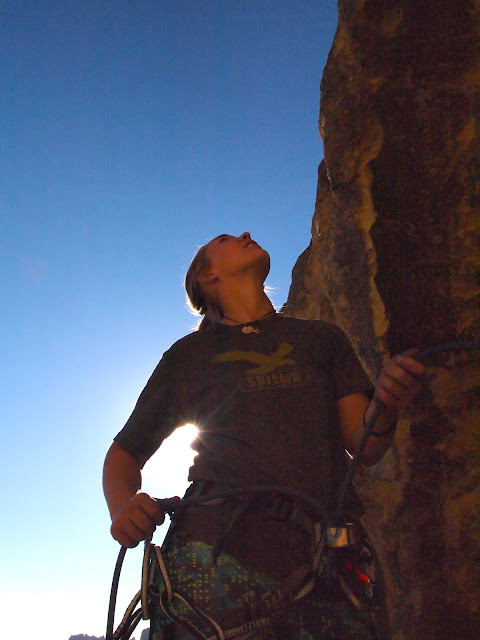 The following weekend I had a field trip in the Painted Hills of eastern Oregon. We spent the night camping right in the middle of Mitchell, Oregon, circled around a roaring fire built into a lofted barbecue pit. I was convinced we were the only people in town.  Saturday was spent conducting geomorphology experiments in the badlands.  I'll spare you the details as dirt is somewhat of a niche interest. 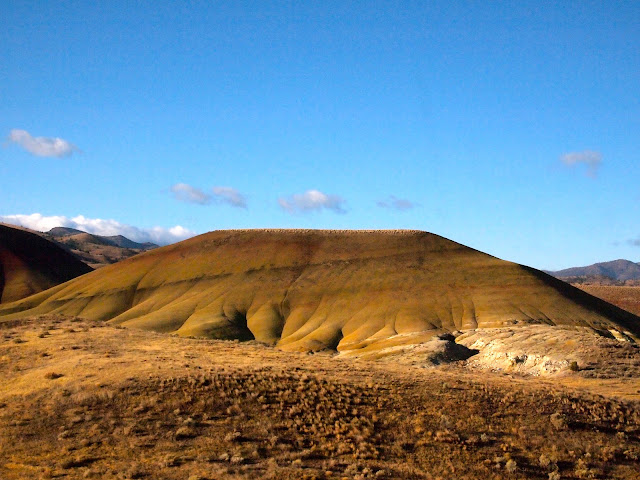 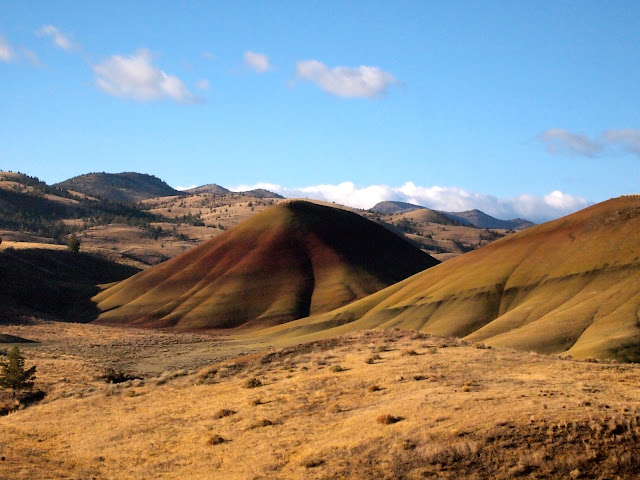 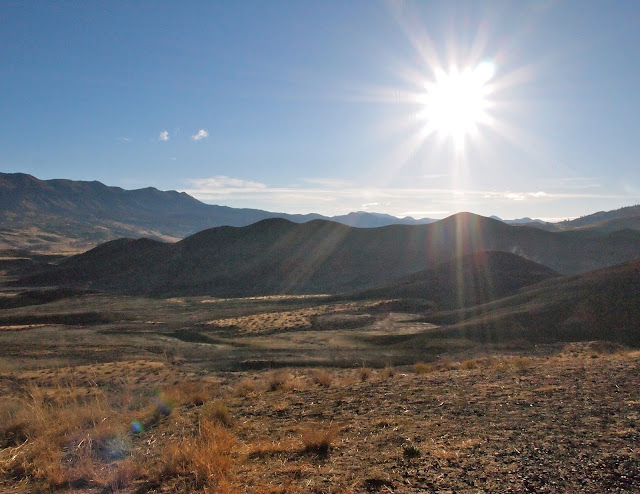 As it was raining on the west side, I stayed east and spent Sunday at Smith again with Peter.  We climbed a 3 pitch mixed route on Phoenix Buttress called White Satin (5.9).  I took the first sport pitch of steep 5.7 knobs as well as the second 5.7 trad pitch.  Two-thirds of the way up, I found myself slightly off course and had to do an unprotected traverse around a flake.  The rope drag was too bad to continue, so I had to build a hanging belay to bring Peter up to me.  I had never done this before.  Of course I have built a trad anchor a number of times, but always on a ledge.  I'd never actually hung on one of my anchors, or on any placements for that matter.  Given the situation, it took me far too long to build the anchor.  Suddenly no placement looked okay and I was sure I had no options.  When I finally got the anchor made and gingerly weighted it, it shifted and creaked and (luckily) held. 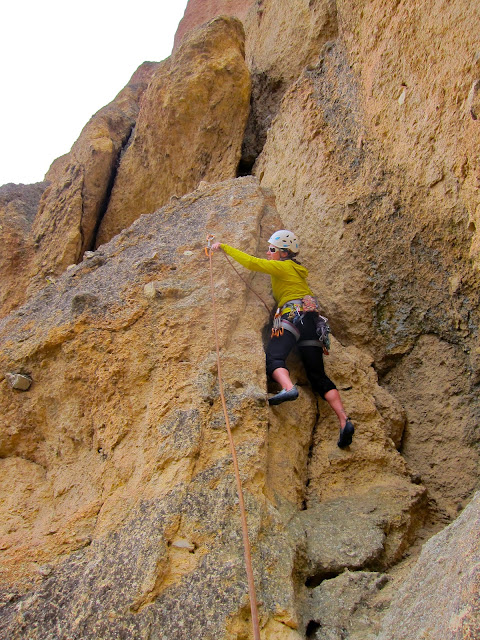 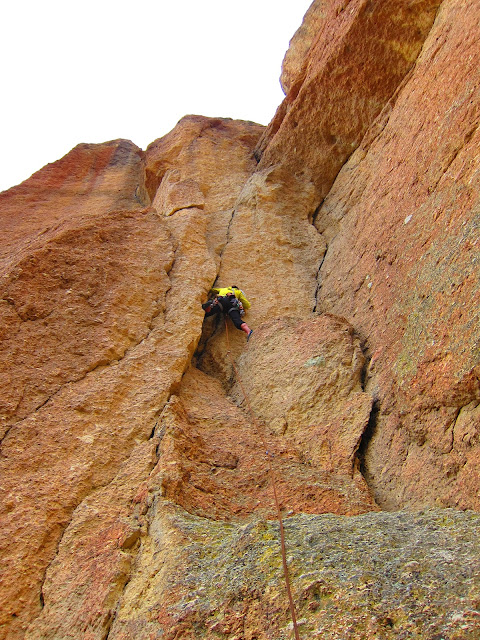 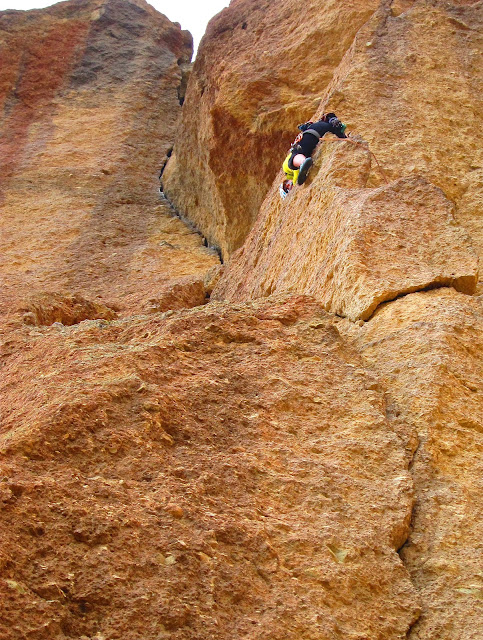 I belayed Peter up to me and we moved the anchor a few meters higher to some bolts.  The last pitch was a beautiful arching dihedral (5.9) that Peter lead.  As I belayed him I was as alone as one can be at Smith.  Typically, there is always someone ahead of, behind or next to you in one way or another.  But this time we had the wall all to ourselves.  It was quite up there, but voices from below echoed around me.  Amongst the sounds of laughter, frustration, accomplishment and failure I was a lurking eavesdropper.  I followed Peter with ease (I'm getting better at this crack climbing thing!) and topped out to perhaps my favorite view yet at Smith. 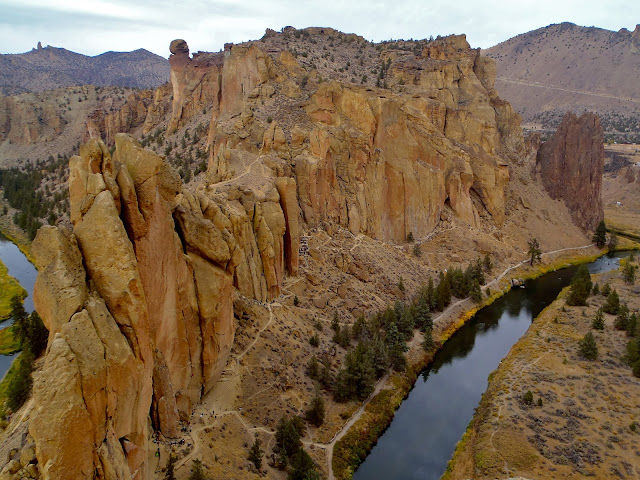 View from the third belay 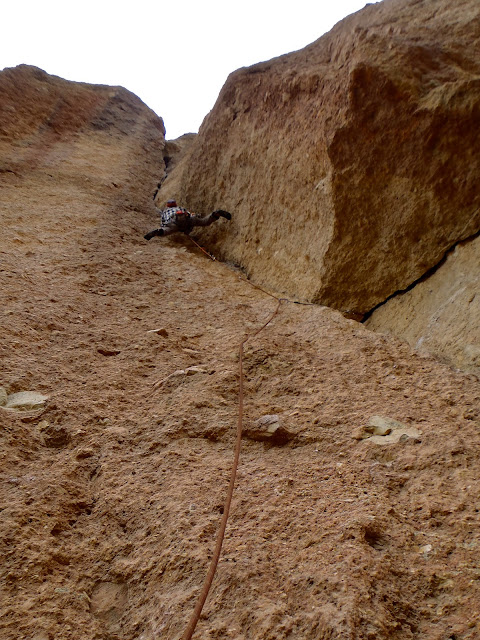 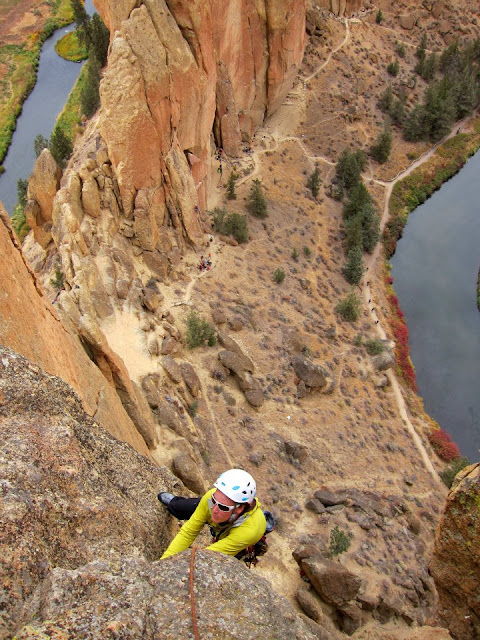 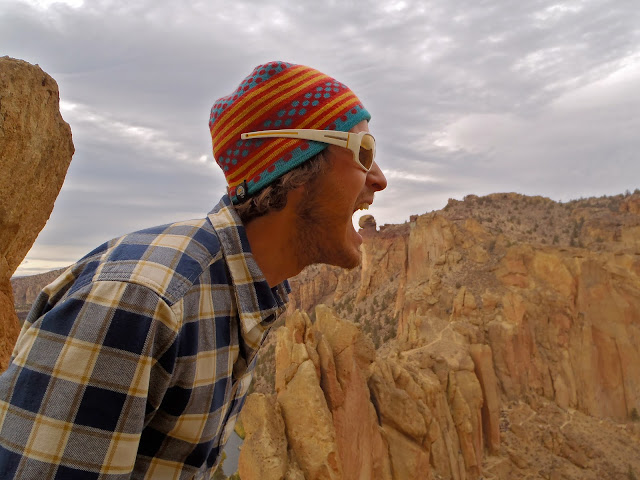 After a leisurely lunch and beer we wandered over to Phoenix (5.10a).  I would say that, in general, I have a good lead head.  When I get scared I don't freak out and I tend to climb more confidently when on the sharp end.  Apparently the ceiling for this confidence is at the 5.9-5.10 boundary.  The minute I'm forced with the number 10, I get scared.  Outside, in a gym, it doesn't matter.  I can climb them fine on top rope, but that doesn't matter either.  So I've been on a mission to stop being a wuss and lead some tens.  Phoenix is a highly rated climb at smith and Peter thought it would be a good one for me to lead.  Despite the fact that the first bolt is about 20 ft off the ground, I sent the first half with relative ease.  I wont go into the details (because I don't want to admit sobbing softly against the wall), but when I got to the crux, things went poorly.  I'm irrationally afraid of taking a "safe" fall and couldn't bring myself to make the moves.  Eventually, Peter climbed up to clip the next bolt so I could finish the lead from there.  It was a disappointing show, given my goal, but not a disappointing effort.  Despite my fear and frustration, I got back on the horse. 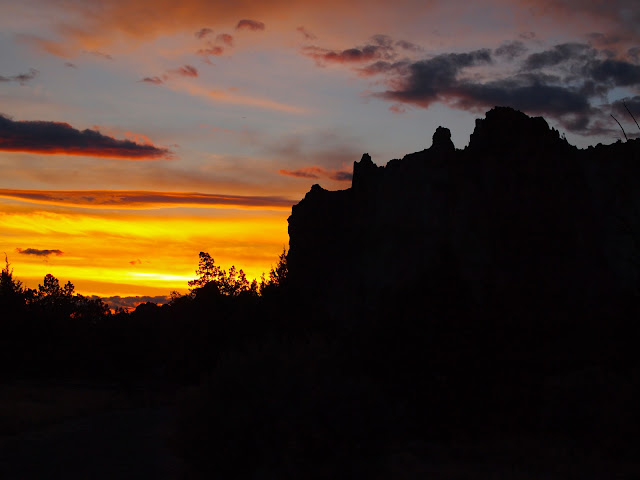 We drove towards the sunset into a wall of rain and clouds.  Back to the west where there was no sunset; just a darkening sky of gray that faded into black.
Posted by Katie Paulson at 11:20 PM