I am going to tell you the story of the most incredible accidental Thanksgiving of all time.  I don't think any of the words I can string together will do it justice, but I will give it the good ol' college try.

I didn't go home for Thanksgiving, making this year my first away from home.  Instead, Bert came down to Eugene to have an adventure with me.  I thought exploring a new area of Oregon with my best friend would be a fun way to spend the long weekend.  We made plans to meet up with Lauren and her visiting friend, Peter, near Diamond lake.  The lake sits between the Umpqua hot springs and Crater Lake National Park on Highway 138.  We loaded up our snowshoes and winter clothes on Thursday morning and headed south.

There is a ski cabin nestled between Mt. Bailey and Hemlock Butte west of the lake.  It is booked solid all winter long.  Lauren and Peter had skied to it Thursday morning and found it empty.  Foolishly thinking it would stay that way, we planned to meet them in the parking lot and hike up there for the night.  Upon arriving in the snow park, Lauren informed us that there was indeed a party headed up to the cabin.  Not just a group of people, but an actual party.  They had been towing kegs in whitewater kayaks, sleds full of turkeys and other festive dishes, christmas lights, booze and basically a whole kitchen, including a deep fryer.  Disappointed and jealous, we pitched our tent a few meters away from the parking lot and mentally prepared for being cold for the next three days. 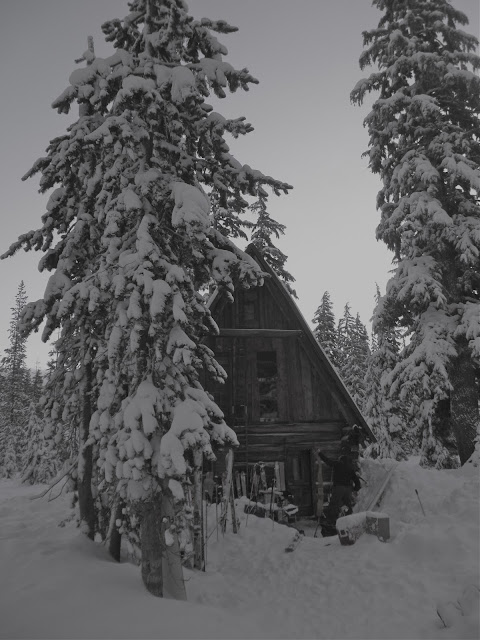 Peter had grabbed an orphaned sled from the cabin to haul gear so he wandered over to a group of the partygoers still in the parking lot to have them return it.  Before he could even ask, they invited us to join them.  After some deliberation, an RV hauling snowmobiles rolled into the parking lot effectively sealing the deal.  As great as it sounded to witness this redneck Thanksgiving, the air and sound pollution wasn't so appealing.  We quickly packed up our tents and began the 3.5 mile hike into the cabin on our skis and snowshoes.  It was a whiteout blizzard the whole way and once we donned our headlamps, visibility was reduced to a glowing orb of snowflakes.  We knew we were getting close when we started finding sleds and containers abandoned along the side of the trail including one already tapped keg.

Pressing on, the lights of the cabin emerged through the trees, a warm haven amidst the frozen slurry.  We quickly pitched our tents outside and cautiously wandered towards the glow.  Immediately, Peter and Lauren were recognized from passing the crew earlier, we were welcomed with open arms and dubbed the "parking lot people."  Inside, the cabin was adorned with lights and music and trimmed with an assortment of drying clothes strung from rafter to rafter.  The wood stove was burning hot and people were gathered in pockets-- drinking, laughing, cooking. 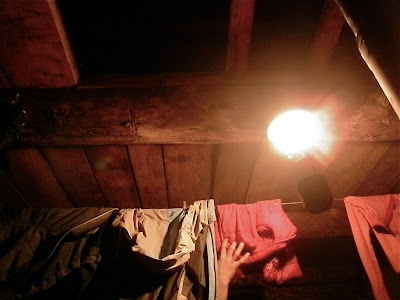 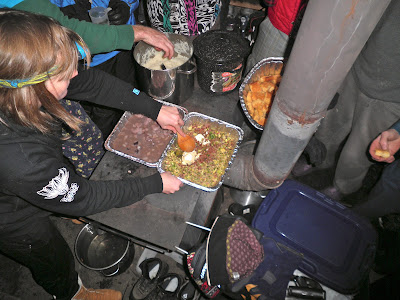 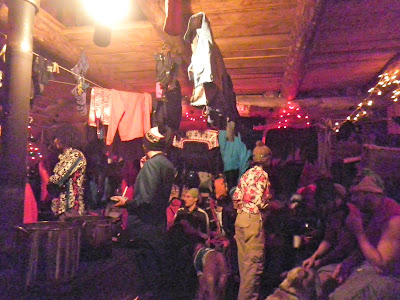 The night only got better.  Turkey after turkey was pulled from the fryer, the beer was flowing and dancing was soon to follow.  What was really amazing about the night was meeting one new person after another who were there for the very same reason: spending time with our friends in the backcountry of our beautiful state.  The party wound down and one by one we trickled off to the warmth of our sleeping bags.

Bert and I woke to the soft dawn light and decided to head up the mountain early since it was so nice out. 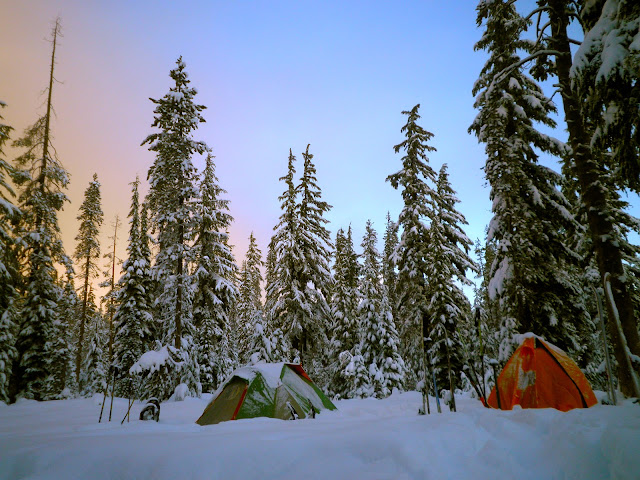 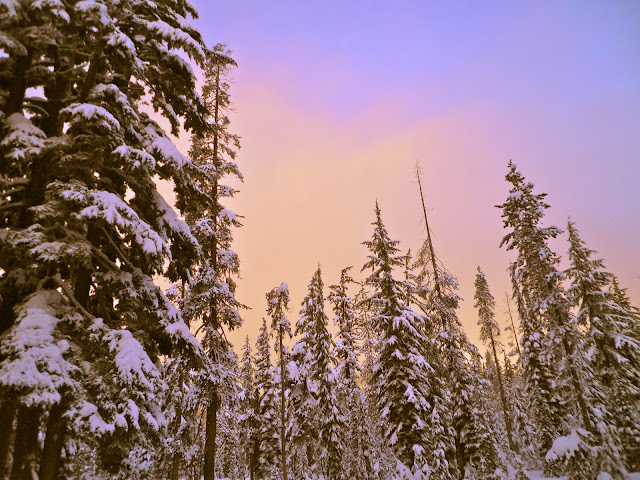 We made some hot brews, downed granola bars and donned our snowshoes.  We were the first ones out to break trail up Mt. Bailey.  The air was brisk and the sun was shining through patches of wispy clouds.  I got the hang of walking through the heavy Cascade snow fairly quick.  After a few stops to check the map and compass we found ourselves on a high ridge leading to the summit. 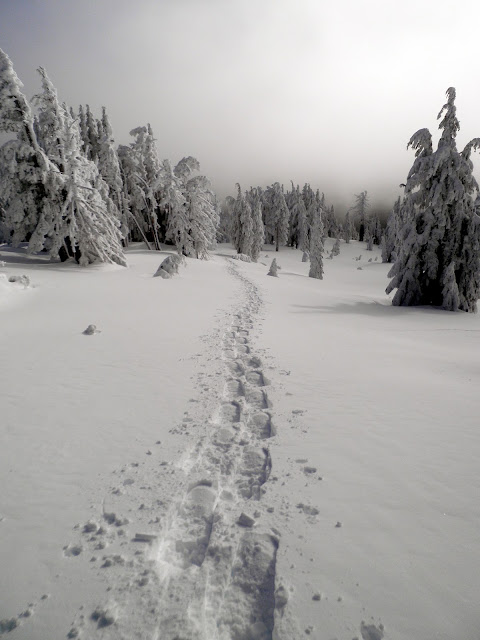 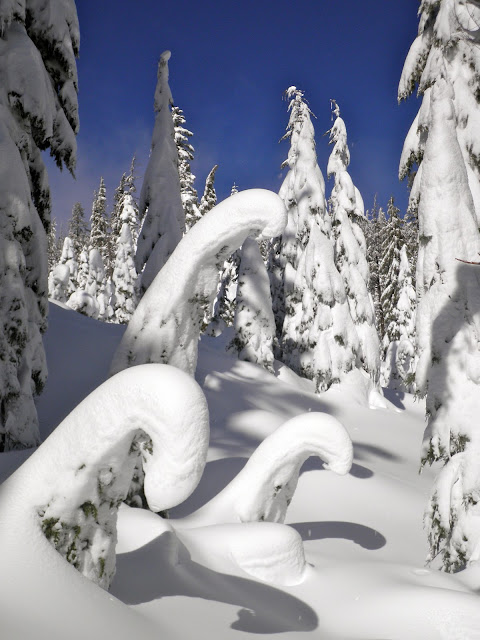 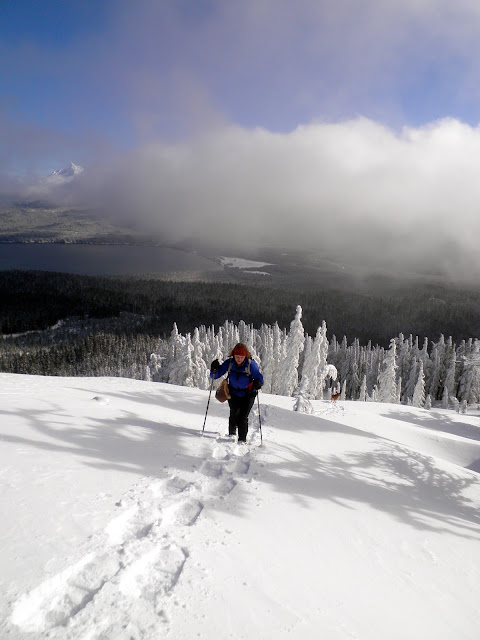 All along the ridge we caught glimpses of Mt. Thielsen on the other side of the lake.  Thielsen, once a smooth sided shield volcano, is now a craggy peak topped by a gnarled horn.  Its unique shape comes from glacial erosion that gave it a foreboding, knife-like appearance.  Nowadays, it is heavily rimed and brings to mind an icy swiss alp. 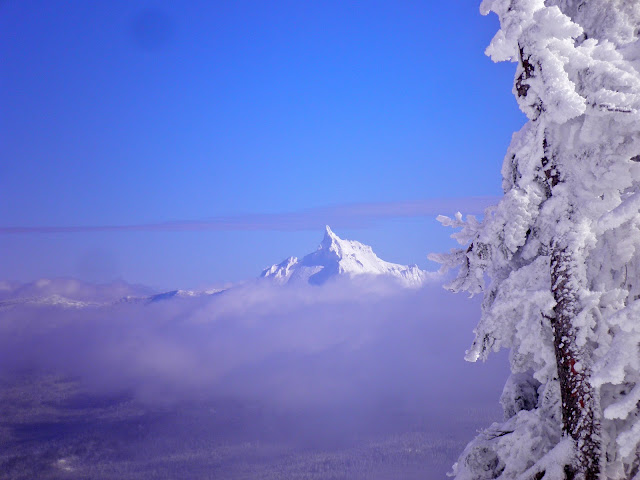 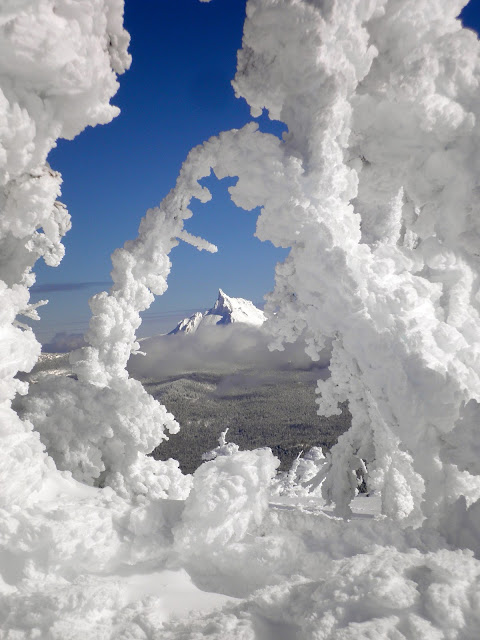 We hiked until the route became precipitous, a few minutes below the summit.  Up here it was a maze of rime sculptures that had grown far beyond the reaches of the saplings buried within.  The high winds had created icy dunes and unusual features along the ground. 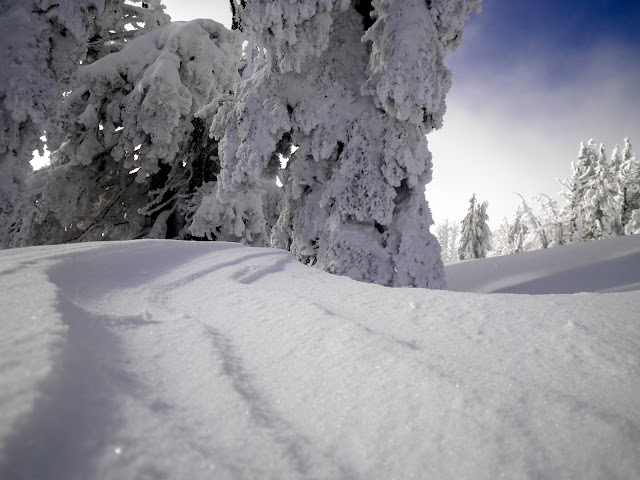 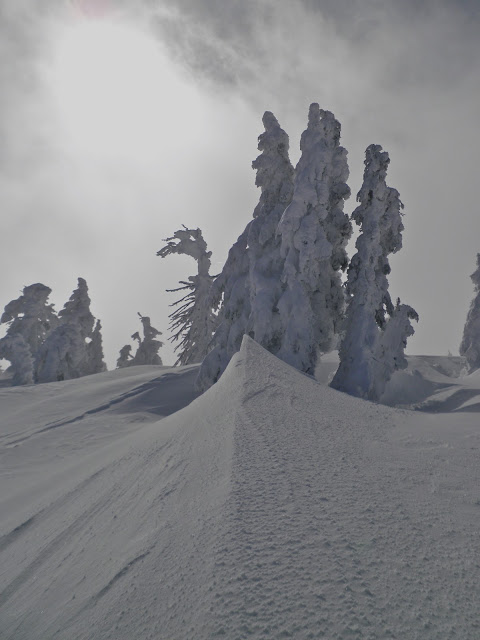 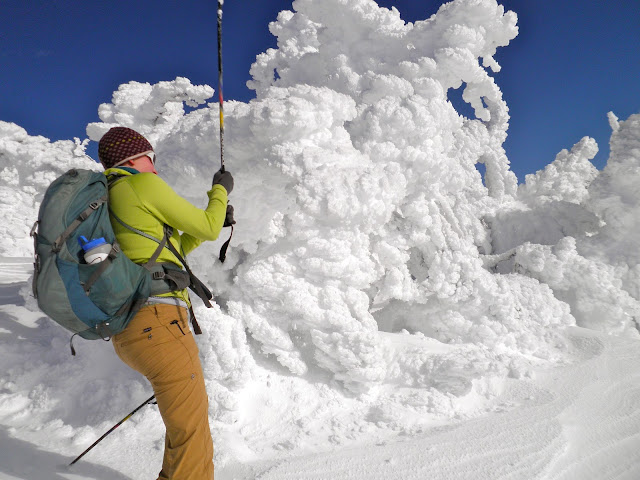 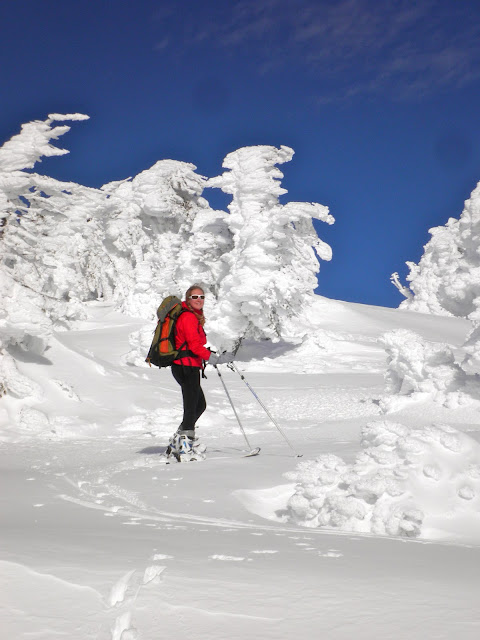 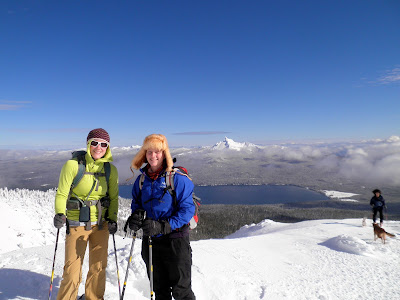 
The hike down went much faster.  We walked mostly in silence save for the calming "fwomp, fwomp, fwomp" of the snow beneath our feet.  Upon returning to the cabin, I ate a hot meal with a cold beer and promptly fell asleep for the next few hours.  When I awoke it was dark and I made my way back to the warm cocoon of the cabin. 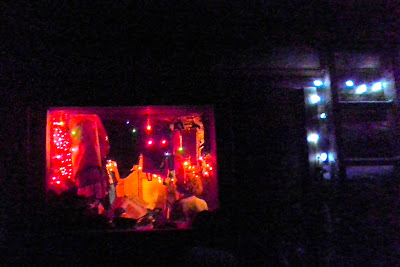 Inside, someone was making turkey stew and melting snow for hot chocolate with kahlua.  The dance party was warming up and the silly costumes were out.  The party kept up a steady tempo into the early hours of the morning when the last stragglers made it to bed.  I remember crawling out of my tent to pee and being swallowed up by darkness and silence.  It was eerie compared to the bustling sounds of festivity and joy that had become woven into the scene so well it seemed natural.  The stars were out and I was reminded of where we were, so tucked away in the mountains, hours from the nearest decent sized town.  It was pure bliss . . . or I'm sure it would have been, were I a bit more sober.

The morning brought a slow stream of people from their various sleeping places.  We had a leisurely breakfast and began to pack up.  It was an unusually warm and sunny day as we hiked back to the parking lot, asking ourselves all the while that the last two days actually happened.  We had some last views of Thielsen on the hike and in the car en route to the hot springs. 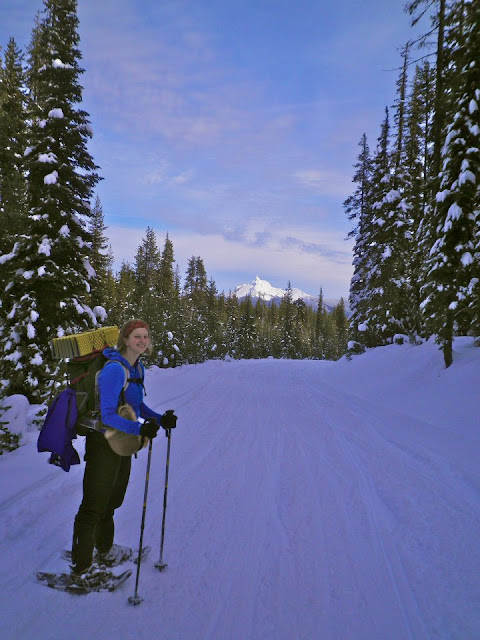 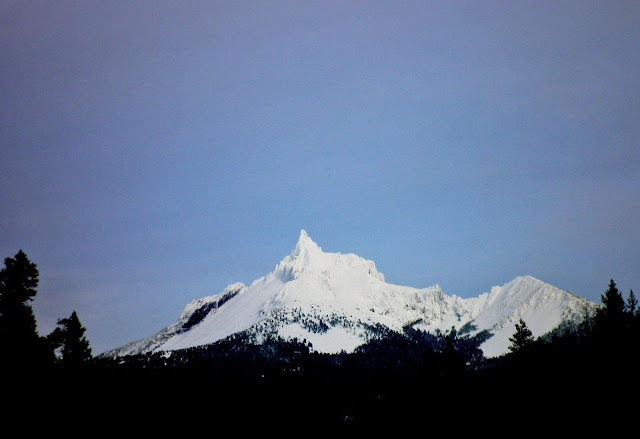 A soak in the springs and a long drive later, we were eating gourmet (and gluten free!) pizza at the Granary in Eugene.  We spent the time recounting our favorite parts of the weekend with a pair of our new friends who were heading back to Portland.  Stories were told and retold, and plans were made for future adventures before we finally parted ways.  Here's to getting the invite next year! 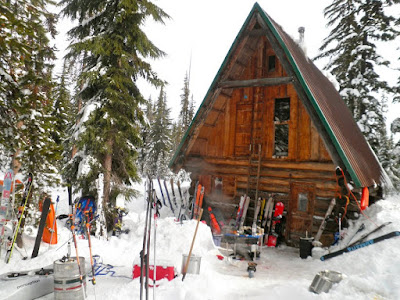