I just ran across an article that reminded me to write this post that I meant to write months ago.  Seems appropriate to do it now while I'm stuck inside with a stomach flu.

The culmination of my Solo Summer of Adventuring in Hood River was a fast trip around the Timberline Trail, a 40 mile trail that circles Mt. Hood.  I didn't want to take any time off work so I had two days and a morning to do it.  That's not a big deal though, some people do it in a day, but they're Hard Ass Trail Runners , one of which I am not.  Add overnight gear and two days becomes slightly more burly.

Let me preface this story with some embarrassing background info.  Save for my trip up Mt Shasta in June 2013, where I climbed solo but was surrounded by people the whole time, I haven't done any sort of backpacking alone.  The embarrassing part is that I've been irrationally afraid of the dark (outside dark) since I was a kid.  I was still making my sister come outside with me at night to pee at 18 years old.  This has slowly lessened throughout the years, out in the desert it's not bad, where there are no shadows and less wildlife.  On nights when the moon is full I can suck it up and wander outside the tent a little bit.   But ultimately, I am still afraid of the dark.

I packed minimal food and no stove or water purification gear to accommodate having to pack a 2 person tent (for previously stated phobias).  My car was packed and ready to go when I went to work on a Saturday night in early September.  I worked until about 12:30am then headed toward Cloud Cap.   After driving for about 30 minutes on the highway, it's a 9 mile windy gravel road to the trail head.  The moon was almost full, which gave me more confidence for the two nights to come.


I slept in the back of my car that night with the alarm set for 7am.  I was up and hiking by 8 and quickly approached the first obstacle:  Elliot Creek.  Elliot Creek is a glacial outwash river that drains the Elliot Glacier.  It's raging and muddy and rocky with lateral moraines towering on either side.  There's no proper trail here because it was washed out nearly a decade ago in a large landslide.  The terrain was loose but not any more challenging than any other scree slope.  It took a little bit to find somewhere I could cross without wet feet or falling in, which would be a trip ender.


After a few minutes of picking through boulders and scrambling the other moraine I was on my way.  The day was filled with views of the amazing north side of Hood.  Elk Cove was an amazing area that I would love to visit again next spring.  After the scenic part of the day, the long descent to the Sandy river was uneventful and rough on the knees.  Just after Ramona Falls I set up camp in the Sandy River wash by 5pm.

I made it through the night without freaking out, and even left the tent to relieve myself once or twice.  Being out in the open and aided by moonlight made it a lot better.  Day one, I'd hiked 18.5 miles.

The next morning the trail took me up past Sandy Creek, everything was covered in soft green moss and luscious ferns.  A profound difference from the stark, rocky terrain of the east and north sides.  About a mile up the trail a guy stopped to warn me of angry wasps ahead.  He said someone must have disturbed a nest because he got swarmed and stung about a dozen times.  I was on high alert after that.  Every time I heard buzzing (which was pretty consistent the next mile and a half) I tried to walk a little faster, but at the same time, without disrupting anything.  I thought I was in the clear when the trail reached the ridge above Sandy canyon.   Unfortunately, on one swing of the arm I caught a wasp in my armpit and it stung me immediately.  This now marks the second armpit sting of my life, wouldn't recommend it.

Luckily, the next turn in the trail brought me to a huge field of huckleberries (favorite!) that ended my cursing rampage RE: the sting.  I wasted far too much time here gorging myself on berries before continuing on.


The next notable landmark I reached was Paradise Park.  It's incredible.  A high plateau coated in soft ground cover (presumably epic wildflowers in early summer) with rocky ridges poking out and prime camp sites.  I will be back, Paradise Park, and I will romp naked without a care in the world.


Sadly, I couldn't stay long.  I was nervous about making it through White River canyon before dark so I took a quick water break, busted out some yoga and made way for Zig Zag canyon. 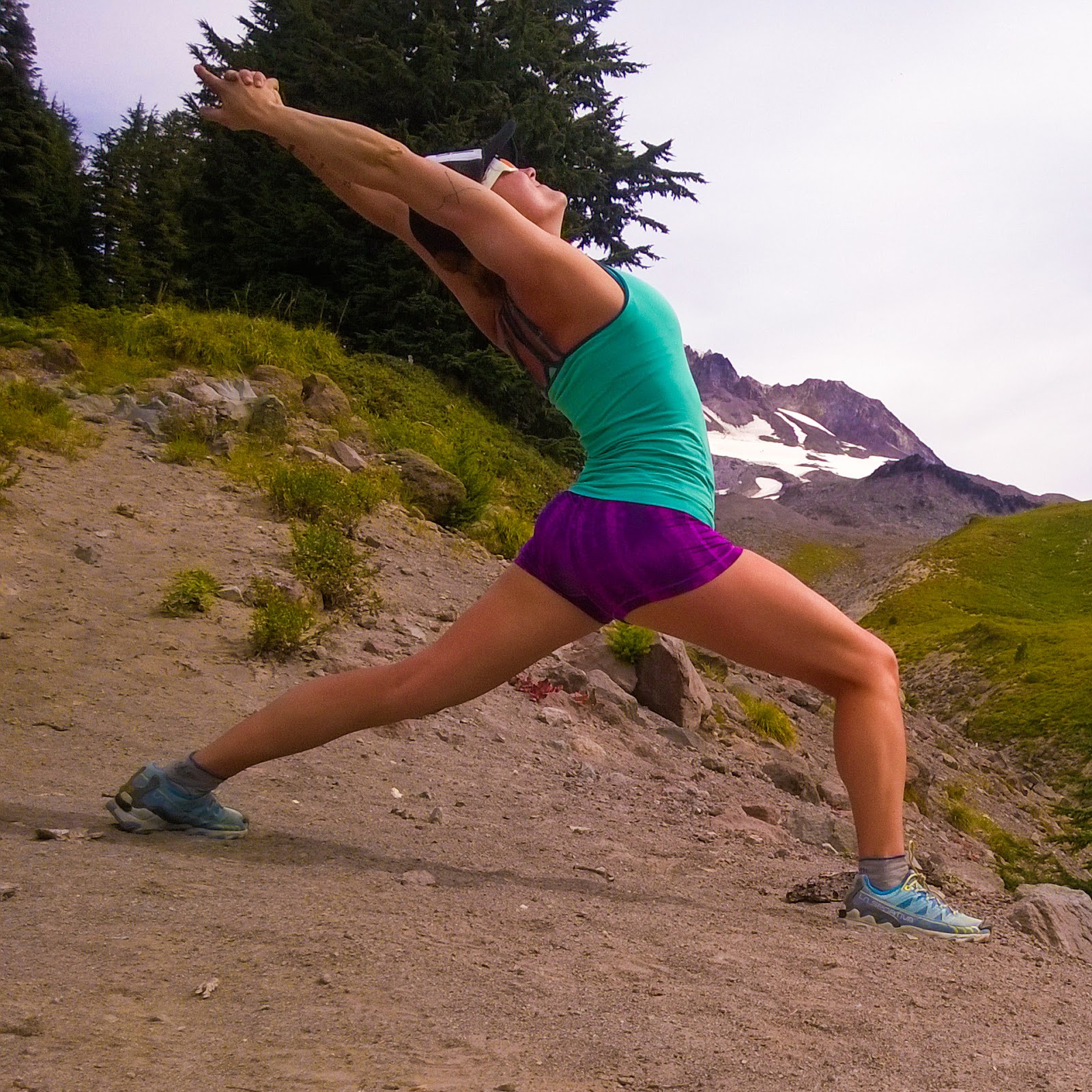 A steep descent to the river was followed by a steep ascent.  The climber/mountain goat in me bitched the whole way, "why can't I just go around?!"  The Zig Zag River was a little scary for me to cross, mostly because I tried for a while in the wrong spot, before finding the "bridge."

The river crossings definitely gave me the most pause during the trip.  Not because any one of them was particularly treacherous (Make no mistake, they can be during the melting season or after heavy rains.  A couple of weeks before someone died when a bridge washed out of the Sandy River.), but because I was all alone and if I did slip and hit my head I could just drown in the freezing water before anyone could help me.

After unpuckering from that wobbly, wet log, I got this view on the way out of the canyon.

The rest of the way to Timberline was uneventful.  There were a lot more people on this portion of trail, since it's a day hike from the lodge.  I had a lot of quick convos with people incredulous about me out there by myself.  Except the one ranger I spoke to who said, "Oh I see a lot of women come through the PCT alone!  Like 10-15% of the women I see are hiking solo!"  Maybe math isn't part of Ranger curriculum, but that seems like a very small number of women to me.  And I can't even compare myself anyway because those are Hard Ass Through Hikers, one of which I am not.

Timberline lodge appeared around the corner and I made my way up to the bar and had a beer and fondue ($$$$$$) amidst the tables of retirees competing about who knew the most about climbing the mountain or whether or not there are glaciers (Yes, there are).  I saved two pleasant old ladies from their cranky man companion who condescendingly told them, "there are no glaciers on this mountain."  They gave me caramels and well wishes for my harrowing (to them) journey.  Cranky man glowered in the corner, presumably about the fact that a woman was outdoors without a man to escort her.

Getting through White River Canyon was a huge pain in the ass.  The descending ridge was ankle deep glacial till which was unpleasant, but arguably gentler on the knees.  This crossing took me longer than any of them.  If there was a straight forward place to get across, I could not find it.  There were hardly any cairns for guidance so I picked around for easily 20 mins trying to find somewhere less sketchy.

The next park of the trek was kind of a death march.  I was tired, my shoes full of sand and I knew I needed to make it at least to Meadows (ski resort) for the night.  Well, there are no good places to camp within the boundary.  In hindsight, this makes plenty of sense.  It was neat hiking through the resort in the summer, seeing all of the runs in their snow-less glory.  I descended into Heather Canyon thinking that I could camp near water at the bottom.  I passed a few good places to camp next to BEAUTIFUL streams and waterfalls, but I didn't stop because I am an idiot.  At the bottom of the canyon there was only a narrow strip of rocks and a muddy stream.

I continued up Pea Gravel ridge (yes, it's as scenic as the name might suggest) and descended into Newton Canyon.  At this point I was going to grab the first viable site I could find.  Luckily, just across Newton Creek there was a nice, sandy spot out in the open.  By the time I got my tent set up it was dark and I collapsed, exhausted and didn't even bother eating.  I had hiked 19 miles on day 2 and was only about 4-5 miles from my car (extra mileage due to an accidental detour on day one).

The last morning was rough on the legs.  It was one of my favorite areas of the mountain.  It's the highest elevation that the trail reaches and is nothing but a rocky moonscape dotted with a few shriveled, weather-beaten trees.  The trail is hardly a trail, though.  So I stumbled for 4 more miles over loose cobbles and patches of snow.  Finally I reached the parking lot, basked in my sense of accomplishment, took a celebratory naked picture and drove home.  A couple hours later I was back at work.

Posted by Katie Paulson at 9:07 PM