I went skiing on Shasta a few months ago, it was the first time I've been on the mountain after driving past it so many times.  Having grown up around Mt. Rainier, Shasta doesn't seem as big or magnificent.  True, it doesn't have the glaciers that Rainier has, the weather is generally more mild, there's less snow.  I'll tell you what, though, that mountain is still big.

I was invited to join some friends to climb it last weekend, and I can never turn down an offer like that. I decided that I wanted to climb alone though.  On a mountain like Shasta, you are never really alone.  On a weekend it's a veritable conga line of climbers.  Despite the crowds, I wanted to move on my own and function on my own; not to be standoffish, but because I'd never done something like that before.

Anything mountainous that I've climbed, I've climbed with Peter.  He's much more experienced and confident than I am.  This is not a bad thing, because as a result I've learns a lot in the past two years; however, I tend to take the back seat and let him deal with things.  Lately I've had the urge to go do something alone, and this was the perfect opportunity.

My goal for the weekend was to really push myself to see what I could do.  Avalanche gulch isn't a technical route at all, so it was a good test of my speed and physical reaction to altitude (previously only been to 11,400').  We took off Friday morning and were headed towards high camp at Helen Lake (10,400') at 3:00pm.

I tried to get to sleep around 8pm, but it was still light out and I was too excited to sleep at first.  I kept hydrating and listed to some music in my sleeping bag hoping to drift off a little.  I emerged from my tent to catch the sunset sometime after 9 and then was able to sleep a little bit.

I slept restlessly, plagued by percussive and voluminous gas- probably due to the dehydrated chili that was probably not cooked thoroughly enough.  My alarm was set for 1am, with the intention of leaving by 2 in the hopes of seeing the sunrise from the upper ridge.  Around 12:40 I had to get up and figure out how to use a blue bag for the first time, while hunched awkwardly in my vestibule.  I heard other people up and moving, so I decided to eat a quick breakfast and get on the route before anyone else.

I was climbing by 1:30 guided only by the orb of light from my headlamp.  I've never done such an early alpine start before, and I sure as hell haven't done a lot of solo nighttime hiking.  The mountain was almost noisy, with crackling ice and trickling water.  There were faint voices behind me, and twenty minutes in, a steady stream of headlamps was following me up the mountain.

My crampons didn't fit my boots, apparently.  They are the aluminum strap-on kind, and are barely too large at their smallest setting.  I stopped every 15 minutes for the first hour to reattach them, swearing to myself and experiencing terrible gastrointestinal pain every time I bent over.  Eventually I said screw it and took them off.  The snow was very firm, but thanks to sun cups and penitentes I had pretty secure footing without crampons.   Once I lost the crampons, I was able to straight line the route, following the gissade track in the dark.

The route through the Red Banks was incredible.  Essentially a slot canyon through crumbling breccia, the path is narrow, sometimes bounded by tall, steep walls.  At other points, one could comfortably walk up a low angle section of the rock, which I opted for when I felt insecure on the snow.  At this point, the pair of climbers that were behind me had vanished, and I was once again all alone. 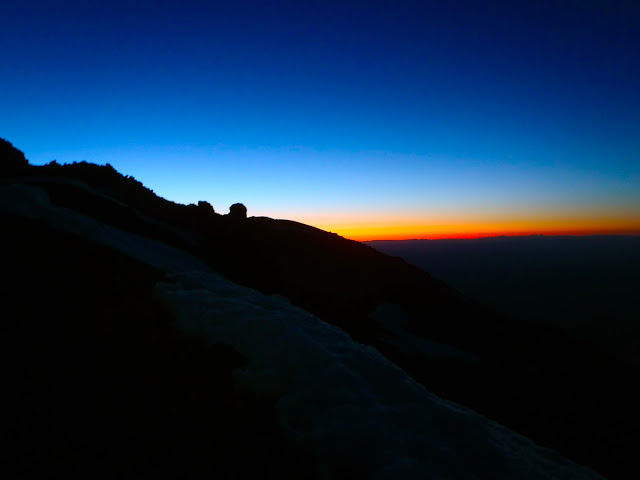 Topping out the ridge was like stepping into a moonscape.  A faint grey light was dawning to the east and the mountain was surrounded by a thin haze.  I found "Misery Hill," a return to the dusty volcano trash and began to slog up it, thankful to return to a mindless slog for a bit.  At this point I was over 13,000 feet and I could feel it.  I never felt sick, save for a faint headache (perhaps because I left the liter of water I brought untouched until the summit), but I could tell my body was depleted.  I focused on slow, controlled pressure breaths, like Peter has taught me.  Every step dragged, like my boots were full of lead and I felt high, euphoric and definitely a little loopy.  By now the sunrise was beginning and I stopped for a few quick photos.

Once on the summit plateau, I picked out the summit tower and made my way up some steep snow towards it.  I had to traverse under an overhanging rock bulge that gave me pause to get back on the actual route.  I paused just below the summit pinnacle, threw my ice axe on the ground and bolted excitedly up the short scramble to the top.  I was crying, I didn't know why, but I was.  I stood there, looking through blurry eyes at the golden rocks below me, the hazy sunrise the vast and extensive space in all directions.  It was magnificent, and for the next 30 minutes, it was all mine.  Not a soul was up there with me, and not a soul was anywhere to be seen on the route below.  At this point I was panting hard, totally forgetting about breathing right and letting out whoops from the summit. 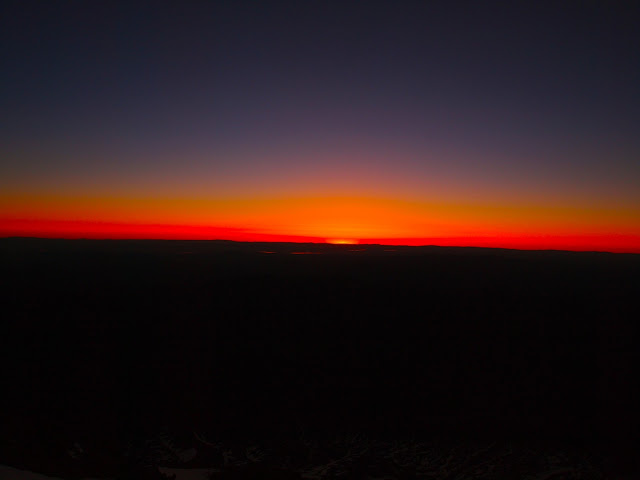 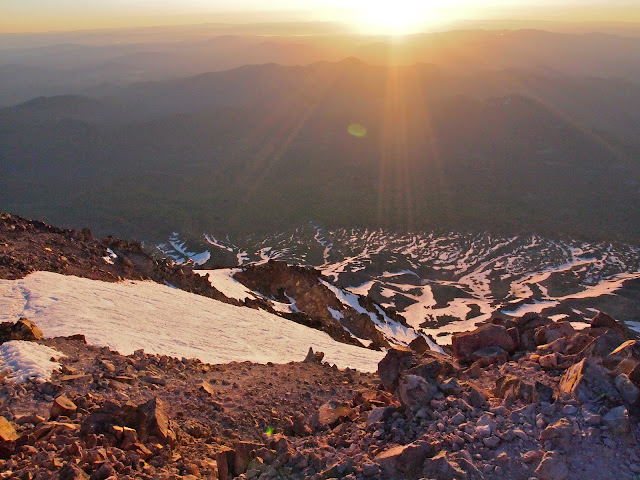 I sat there watching the sunrise, drinking my tea and eating every scrap of food in my pack, just basking in the feeling of accomplishment.  I had made it to the summit in 3.5 hours (~3,700') over almost 2 miles.  I felt a little like my emotional response was an overreaction, but there is something very special about doing something alone.  I proved to myself that I could climb that high and do it quickly and efficiently with no help from anyone else.  It's a truly spectacular feeling, or maybe it was just the altitude getting to me. 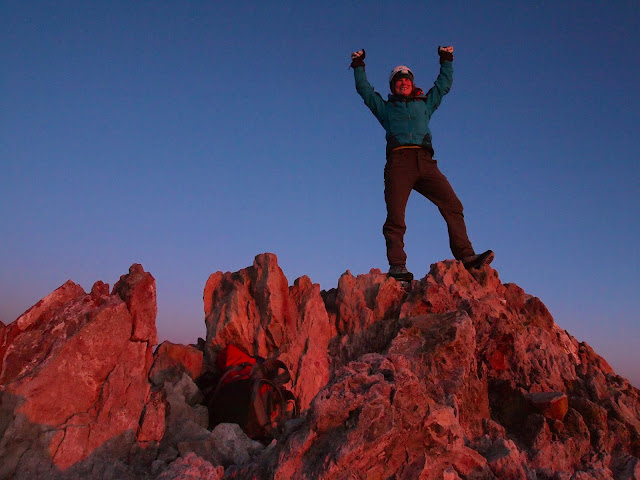 I started down, taking my time, being careful not to slip with my crampon-less feet.  The epic glissade track was still too icy to use- I tried, it was a death trap.  On my way down I caught this amazing view. 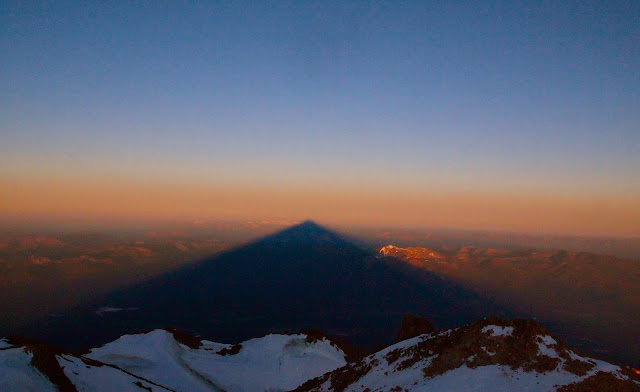 I got back to my tent and took an hour long nap while the sun warmed my tent.  Around 10:30 I was packed up and headed back down the mountain.  I made quick work of the decent between glissades and nearly running downhill.  I took a break to wait for the car keys to catch up with me at Horse Camp, where I basked in the sun pantless, allowing them to dry out from sliding down the wet snow.

Once down, our whole group went to a pub in Mt. Shasta City to eat burgers and drink beer and catch up on everyone's climbing stories.  I didn't stop being stoked until I collapsed in my bed back in Eugene that night.  Perfect.
Posted by Katie Paulson at 2:09 PM